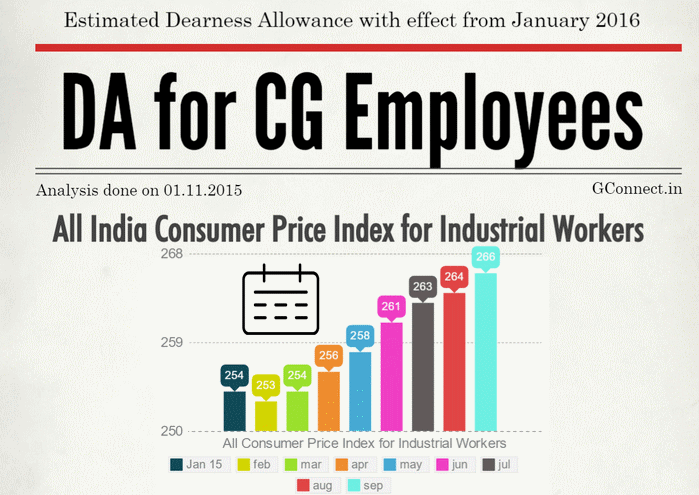 Expected DA from January 2016 – Two Point increase in CPI for Dec 2015 could take it to 126% which is 1% more than what was reckoned for 7th Pay Commission revised Pay fixation.

Consumer Price Index (Industrial Workers) for the month of November 2015 has been released recently by Govt. We have one point increase in CPI for November 2015 which has moved from 269 to 270.

Based on actual CPI-IW for 11 months from January 2015 to November 2015 which span from 254 to 270 and estimated index for the month of December 2015, it is almost certain that Dearness Allowance from January 2016 payable to Central Government Employees including Railway Employees and Defence Personnel will not be less than 125% (6% increase).

Now, if Consumer Price Index (Industrial workers) for the month of December 2015 reaches 172 from the present level of 170, it is certain that DA from January 2016 will be 126%. In that case, 7th Pay Commission pay fitment formula and allowances which are DA indexed will have to be revised accordingly.