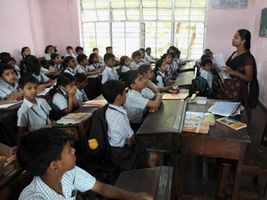 (a) whether the State Government of Maharashtra is awaiting reimbursement from the Central Government for expenditure incurred on 6th Central Pay Commission for teachers and subsequent cadres;

(b) if so, the details thereof and Government’s response for the delay in payment; and

(c) by when the remaining arrears would be provided to the State Government?

STATEMENT REFERRED TO IN REPLY TO PARTS (a) to (c) OF RAJYA SABHA STARRED QUESTION NO. 160 FOR 16.03.2016 ASKED BY SHRI SANJAY RAUT, HON’BLE MEMBER OF PARLIAMENT, REGARDING IMPLEMENTATION OF 6TH PAY COMMISSION IN MAHARASHTRA.

(a) to (c): Yes. The Central Government, as part of expenditure incurred on 6th Central Pay Commission by State Government of Maharashtra, has received a proposal for reimbursement of Central share of Rs.1515,17,48,822 (Rupees One thousand five hundred and fifteen crores, seventeen lakhs forty eight thousand eight hundred and twenty two) under Scheme of Revision of Pay of Teachers and Equivalent Cadres in Universities and Colleges. The Central Government has already released an amount of Rs. 1103,10,44,000 (Rupees One thousand one hundred and three crores, ten lakhs and forty four thousand) in 8 installments as per details given below:

The Scheme of Revision of Pay of Teachers and Equivalent Cadres in Universities and Colleges is subject to amendment of Statutes, Ordinances, Rules etc. of Universities/colleges of various states. The State Government of Maharashtra has been asked to advise the Universities/Colleges to amend their Statutes, Ordinances, Rules etc. in line with the provisions of the Scheme and the same is awaited from the State Government. The remaining amount would be considered for release on receipt of documents mentioned above.
Source : Rajya Sabha