Revision of Pension from 01.01.2006 for Pre-2006 Pensioners – Law Ministry opined that Govt has no alternative but to implement the order passed by the CAT, which was upheld by the highest Court of the land

However, as per DOPT Office Memorandum 38/37/08-P&PW(A) dated 26.08.2014 Government submitted before CAT, Delhi to the effect that Ministry of Law advised to implement CAT Order to Petitioners only 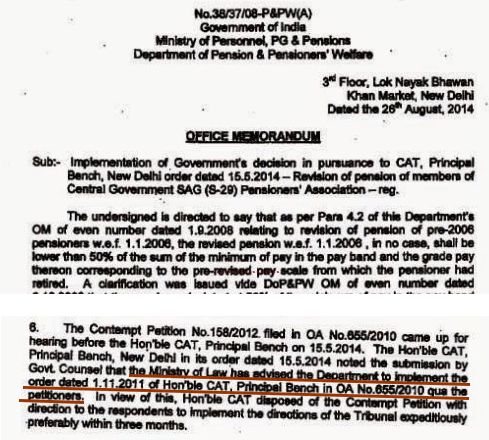 Check the following links to get the details of Court Cases relating to Revision of Pension of Pre-2006 Pensioners from 01.01.2006

D/o Pension & Pensioners Welfare has referred this file to examine on the following issues:

Click here to read the reference topics on Pre-2006 Pensioners