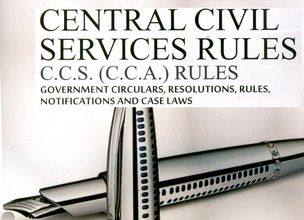 The undersigned is directed to refer to this Department’s OM of even number dated the 26th December, 2013 on the above subject and to say that guidelines/ instructions regarding Technical Resignation have been issued from time to time. It is now proposed to further consolidate these instructions, as the Department continues to receive frequent references on these issues.

2.1.2 This benefit is also admissible to Government servants who have applied before joining the Government service and on that account the application was not routed through proper channel. The benefit of past service is allowed in such cases subject to the fulfilment of the following conditions: ·

(i) the Government servant should intimate the details of such application immediately on their joining;

(iii) the authority accepting the resignation should satisfy itself that had the employee been in service on the date of application for the post mentioned by the employee, his application would have been forwarded through proper channel.

(i) In terms of Rule 9(2).of the CCS (Leave) Rules, 1972, technical resignation shall not result in the lapse of leave to the credit of the Government servant. The balance of unutilized Child Care Leave(CCL) as well as all other leaves of the kind due & ‘admissible will be carried forward.

(ii) As per rule 39-D of the CCS(Leave) Rules,1972, in case of permanent absorption in PSUs/ Autonomous Bodies/ State Government etc., the Government servant shall be granted cash equivalent of leave salary in respect of EL & HPL at his credit subject to overall limit of 300 days.

2.4 Pay Protection, eligibility of past service for reckoning of the minimum period for grant of Annual Increment

In cases of appointment of a Government servant to another post in Government on acceptance of technical resignation, the protection of pay is given in terms of the Ministry of Finance OM No. 3379-E.II:l (B)/65 dated the 17th June, 1965 read with proviso to FR 22-B. Thus, if the pay fixed in the new post is less than his pay in the post he holds substantively, he will draw the presumptive pay of the pay he holds substantively as defined in FR-9(24). Past service rendered by such a Government servant is taken into account for reckoning of the minimum period for .grant of annual increment in the new post/ service/ cadre in Government under the provisions of FR 26 read with Rule 10 of CCS (RP) Rules, 2016. In case the Government servant rejoins his earlier posts, he will be entitled to increments for the period of his absence from that post.

Transfer of GPF on technical resignation would be governed by Rule 35 of the General Provident Fund (Central Services) Rules, 1960.

On technical resignation, seniority in the post held by the Government servant on substantive basis continues to be protected. However, in case of a Government servant deciding to rejoin his substantive post, the period spent iµ another department which he had joined after submitting his technical resignation will not count for minimum qualifying service for promotion in the higher post.

In cases where Government servants, who had originally joined government service prior to 01.01.2004, apply for posts in the same or other Departments and on selection they are asked to tender technical resignation, the past services are counted towards pension if the new post is in a pensionable establishment in terms of Rule 26(2) of CCS(Pension) Rules 1972. They will thus continue to be covered under the CCS(Pension) Rules, 1972 even if they join the new post after 1.1.2004.

In case of ‘Technical Resignation’ of Government servant covered under National Pension System (NPS), the balance standing to their Personal Retirement Account (PRA) along-with their PRAN will be carried forward to the new office.

As per SR- 198, the Service Book is to be maintained for a Government servant from the date of his/her first appointment to Government service and it must be kept in the custody of the Head of Office in which he is serving and transferred with him from office to office.

In cases where a person has already been examined by a Medical Board in respect of his previous appointment and if standard of medical examination prescribed for the new post is the same, then he need not. be required to undergo a fresh examination.

In the case of a person who was originally employed in an office of the Central Government, if the period intervening between date of discharge from his previous office and the date of securing a new appointment, is less than a year, it would be sufficient if the appointing authority, before making the appointment, satisfies itself by a reference to the office in which the candidate was previously employed that (a) that office have verified his character and antecedents; and (b) his conduct while in the employ in that office did not render him unsuitable for employment under Government. If however, more than a year. has lapsed after the discharge of the person from his previous office, verification should be carried out in full/afresh, in accordance with O.M.No.18011/9(s)/78-Estt(B) dated 2nd July,1982.

3.1.1 Lien is defined in FR 9(13). It represents the right of a Government employee to hold a regular post, whether permanent or temporary, either immediately or on the termination of the period of absence. The . benefit of having a lien in a post/service/cadre is enjoyed by all employees who are confirmed in the post/service/cadre of entry or who have been promoted to a higher post, declared as having completed the probation where it is prescribed. It is also available to those who have been promoted on regular basis to a higher post where no probation is prescribed under the rules, as the case may be.

3 .1.2 The above right will, however, be subject to the condition that the junior-most person in the cadre will be liable to be reverted to the lower post/service/cadre if at any time the number of persons so entitled is more than the posts available in that cadre/service.

( c) during joining time on transfer to another post; unless he is transferred substantively to a post on lower pay, in which case his lien is transferred to the new post from the date on which he is relieved of his duties in the old post;

(e) while under suspension.

A Government servant on acquiring a lien on a post will cease to hold any lien previously acquired on any other post.

3.3 Retention of lien for appointment in another central government office/ State Government

(i) A permanent Government servant appointed in another Central Government Department/Office/ State Government, has to resign from his parent department unless he reverts. to that department within a period of 2 years, or 3 years in exceptional cases’. An undertaking to abide by this condition may be taken from him at the time of forwarding of his application to other departments/offices.

(ii) The exceptional cases may be when the Government servant is not confirmed in the department/office where he has joined within a period of 2 years. In such cases he may be permitted to retain the lien in the parent department/ office for one more year. While granting such permission; a fresh undertaking similar to the one indicated above may be taken from the employee.

(iii) Timely action should be taken to ensure extension/ reversion/ resignation of the employees to their parent cadres on completion of the prescribed period of 2/3 years. In cases, where employees do not respond to instructions, suitable action should be initiated against them for violating the agreement/ undertaking given by them as per (i) and (ii) above and for termination of their lien. Adequate opportunity may, however, be given to the officer prior to such consideration.

(iv) Temporary Government servants will be required to severe connections with the Government in case of their selection for outside posts. No lien will be retained in such cases.

3.4.2 A Government employee’s lien on a post shall stand terminated on his acquiring a lien on a permanent post (whether under the Central Government or a State Government) outside the cadre on which he is borne.

a. where a Government servant has proceeded on immediate absorption basis to a post or service outside his service/ cadre/ post in the Government from the date of absorption; and

b. on foreign service/ deputation beyond the maximum limit admissible under the orders of the Government issued from time to time.

The lien of a Government servant, who is not performing the duties of the post to which the lien pertains, can be transferred to another post in the same cadre subject to the provisions of Fundamental Rule 15.

Provisions relating to joining time are as follows:

3.6.2 A Government servant on joining time shall be regarded as on duty during that period and shall be entitled to be paid joining time pay equal to ‘the pay which was drawn before relinquishments of charge in the old post. He will also be entitled to Dearness Allowance, if any, appropriate to the joining time pay. In addition, he can also draw compensatory allowances like House Rent Allowance as applicable to the old station from which he was transferred. He shall not be allowed Conveyance Allowance or permanent Travelling Allowance.

4. All Ministries/ Departments are requested to bring the instructions/ guidelines to the notice of all concerned.