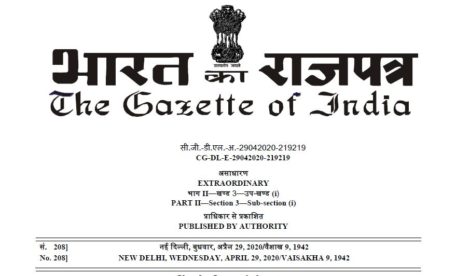 MINISTRY OF PERSONNEL, PUBLIC GRIEVANCES AND PENSIONS
(Department of Personnel and Training) NOTIFICATION

G.S.R. 267(E).—In exercise of the powers conferred by sub-section (1) of section 18 of the Administrative Tribunals Act, 1985 (13 of 1985), the Central Government hereby makes the following further amendment in the Notification of the Government of India in the erstwhile Ministry of Personnel and Training, Administrative Reforms and Public Grievances and Pensions vide number G.S.R. 610(E) dated the 26th July, 1985, namely :—

2. In the said Notification, for the Table, the following Table shall be substituted, namely.—

Functioning of the Benches of the Central Administrative Tribunal will remain suspended till 03.05.2020

Central Administrative Tribunal (Salaries, Allowances and Conditions of Service of the Officers and Employees)