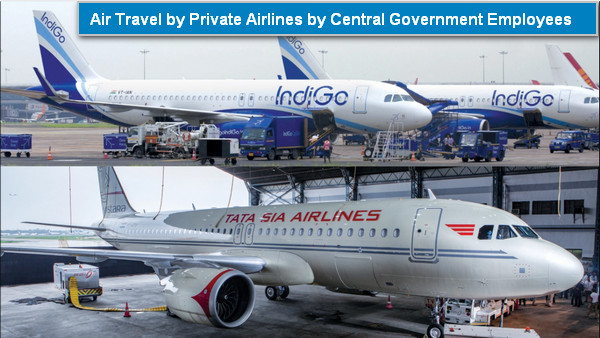 Central Government Employees can now travel by Private Airlines while availing Leave Travel Concession (LTC) and during Official Tour, if they are otherwise eligible for Air Travel as per LTC Rules and Travel Allowance Rules

Air Travel for Central Government Employees while proceeding on LTC and on official Tour is allowed as per rules and procedures under Leave Travel Concession Rules (LTC) and Travelling Allowance Rules respectively.

The present Air Travel Entitlement for Central Government Employees after implementation of 7th Pay Commission Report relating to Allowances by Govt with effect from 1st July 2017 is as below.

Who can travel by Air while availing on official tour?

It could be seen that Air travel entitlement when availing LTC will be applicable only to Emplyees drawing pay from Level 9 as against Air travel eligibility on official tour which is applicable for employees from the pay level 6.

Air Travel on LTC and Official Tour – Which Airlines should I book?

Until 16th February 2022, Air Travel on LTC and Offcial Tour could be performed only using Flights operated by Air India, except for certain relaxation given by Govt such as Air Travel allowed for all Central Government Emplyees while proceeding on LTC to NER (North Eastern Region).

Government had also imposed conditions relating to booking of air tickets to the extent that Flight Tickets have to be booked either directly or through three govt approved booking agents only viz., Balmer & Lawrie, IRCTC and Ashok Travels (ITDC).

In view of earlier Govt owned airliner Air India has been taken over TATA recently, this entity will be a private airliner hereafter.

So, Govt has recently come up with an office memorandum (No. 19024/03/2021-E.IV dated 16.02.2022) to the effect that air travel on Government account both Domestic (including LTC) and International travel can be made by private airlines. Howver, Governement still has not withdrawn the condition relating to air ticket booking.

In other words, Air tickets purchased by Government Emplyees through three Govt approved Ticketing Agencies viz., Balmer & Lawrie, IRCTC and Ashok Travels (ITDC), will only be considered for reimbursement of Airfare by Govt under LTC Rules and Travelling Allowance Rules.

Govt’s Order relating to allowing Air Travel through Private Airlines for LTC and offiical Tour is as follows.

No. 19024/03/2021-E.IV
Government of India
Ministry of Finance
Department of Expenditure

Subject: Modification of instructions regarding Air Travel on Government account.

The undersigned is directed to refer to this Department’s O.M. dated 31.12.2021 regarding booking of air tickets on Government account after disinvestment of Air India through three authorized agencies viz. Balmer & Lawrie, IRCTC and Ashok Travels. Several references have been received in this Department seeking clarification regarding booking of air tickets for Domestic and International travel by private airlines in view of the disinvestment of Air India.

2. It is clarified that the air travel on Government account both Domestic (including LTC) and International travel can be made by private airlines. Tickets shall be purchased only through the above three authorized agents.

3. This is issued with the approval of the Finance Secretary & Secretary (Expenditure).