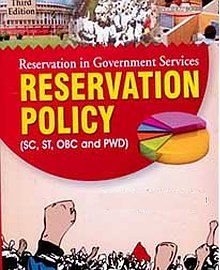 Reservation for SC and ST in Group A, B, C and D groups in promotion up to the extent of 75% – Minister informs Lok Sabha

In accordance with Supreme Court judgment dated 15.07.2014, results of Limited Departmental Competitive Examination 1996 for Section Officer grade were revised by UPSC. Appellants, who were declared successful in the modified results of SO LDCE 1996, were included in SOSL 1996 by this Department. Later the benefit was extended to similarly placed SC/ST officers who were declared qualified in the modified results of SO LDCE 1996. On their inclusion in SOSL 1996, these officers have become eligible for consideration for promotion to the next grade (Under Secretary) on completion of eight years of approved service in SO grade i.e. they become eligible for consideration in USSL 2004 onwards subject to the size of the zone. A proposal for review of USSLs 2004 and 2005 has been forwarded to UPSC in which these officers have been included in the zone.

This was stated by the Minister of State (Independent Charge) for Development of North Eastern Region (DoNER), MoS PMO, Personnel, Public Grievances, Pensions, Atomic Energy and Space, Dr. Jitendra Singh in a written reply to a question by Shri Ronald Sapa Tlau in the Rajya Sabha today.
Click to view Press Release