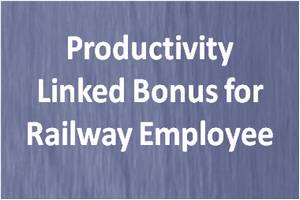 Salient features of the Bonus amendments and the actual amount of Bonus and Production Linked Bonus (PLB) are shown below:

Minimum bonus 8.33% of the salary/wage of an employee.

Maximum bonus including productivity linked bonus shall not exceed 20% of the salary/wage of an employee.

Details of amendments to the Payment of Bonus Act, 1965:

SALIENT FEATURES OF THE PLB SCHEME ARE AS UNDER: –

a) The output for a year is reckoned by the equated net tonne kilometres by adding together:-

ii) Non-suburban passenger kilometres converted by a factor of 0.076.

iii) Suburban passenger kilometres converted by a factor of 0.053.

b)  The input is  taken  as  the non-gazetted  staff  strength (excluding  RPF/RPSF  personnel),  increased  by  the incremental increase/decrease in capital (over average of last three years) during the year.

d) The wage calculation ceiling prescribed for payment of PLB to the eligible non-gazetted railway employees is  3500/- p.m. The maximum amount payable per eligible railway employee is Rs. 8975 for 78 days.

After enactment of the present bonus bill,wage calculation ceiling prescribed for payment of PLB to non-gazetted railway employees will be increased to 7000/- p.m. The maximum amount payable per eligible railway employee can also go upto Rs.21,000.

But,  Railway  Board  is  having  proposals  to  revise  the  calculation  formula  for  PLB which may reduce the expected benefit.
Source : IRTSA