Grant of notional increment/re-fixation of pensionary benefits as per Hon’ble Madras High Court Order in WP No .15732/2017 in the case of Sh. P. Ayyamperumal

Subject: Court Cases on the issue of grant of notional increment/re-fixation of pensionary benefits as per Hon’ble Madras High Court Order in WP No .15732/2017 in the case of Sh. P. Ayyamperumal -regarding.

With reference to Prara one of F. No. A-23011/36/2013-Ad.IIA GOL, M/O finance -Department of Revenue CB of Indirect Taxes & Customs dtd 20.11.2020 ‘I am directed to refer to CBIC’s letter of even number dated 18.10.2019 (copy enclosed) on the subject mentioned above whereby you have been informed that the competent authority in consultation with Department of personnel and training and Department of Legal Affairs has decided to implement the Order dated 15.09.2017 passed by the Hon’ble High Court of Madras in the matter of WP No. 15732/2017, P. Ayyamperumal Vs. Union of India, in personam and not in rem and, therefore, it is not required to be quoted as precedent in future.

Bharat Pensioners Samaj, is of the opinion that while drafting the said Para concerned officers/official inadvertently overlooked the following facts:

1. THE HIGH COURT OF DELHI Judgment in W.P.(C) 10509/2019 GOPAL SINGH ….. Petitioner versus UNION OF INDIA AND ORS OR DE R 23.01.2020 Paras 8. ““ More recently, this Court in its decision dated 13th January, 2020 in W.P(C) 5539/2019 (Arun Chhibber v. Union of India) has discussed the judgment in P. Ayyamperumal at some length in the context of the prayer of an officer of the Central Reserve Police Force (‘CRPF’) who had retired on 30th June, 2007 for notional increment. The Court rejected the contention of the Respondents therein that the judgment in P. Ayyamperumal had to be treated as one that was in persona and not in rem.” and the fact that the SLP filed in the Supreme Court against this Delhi High Court judgment regarding notional increment vide SPECIAL LEAVE PETITION (CIVIL) Diary No(s). 13959/2020 (Arising out of impugned final judgment and order dated 23-01-2020 in WP(C) No. 10509/2019 passed by the High Court Of Delhi ) UOI&ORS VS GOPAL SINGH is dismissed by the Honourable Supreme Court.

2. In C.L. Pasupathy v. Engineer in Chief (WRO)reported in 2009 (2) MLJ 491, Hon’ble High court of Madras has considered the expressions, “judgment ‘in rem’ & a judgment ‘in personam’ In Para 29 of the said judgment honorable court observed as follows :

“29. Courts have held that, “Judgment in rem”, operates on a thing or status rather than against the person and binds all persons to the extent of their interest in the thing, whether or not they were parties to the proceedings. The judgment “in rem”, as distinguished from judgment “in Personam” is an adjudication of some particular thing or subject matter, which is the subject of controversy, by a competent Tribunal, and having the binding effect of all persons having interests, whether or not joined as parties to the proceedings, in so far as their interests in the “res” are concerned.

In determining whether a judgment is “in rem”, the effect of the judgment is to be considered and it is tested by matters of substance, rather than by measure of any particular draft or form”

In short judgment in rem & in Personam can be defined as follows:

Judgment in rem: Judgment in rem is adjudication pronounced upon the status of a subject matter, person or a thing by a competent court to the world generally.

Judgment in Personam: Judgments in Personam are all the ordinary judgments not affecting the status of any subject matter, any person or anything.

It is humbly submitted that the judgment dated 15.09.2017 passed by the Hon’ble High Court of Madras in the matter of WP No. 15732/2017, P. Ayyamperumal Vs. Union of India squarely Fits in this definition which has been confirmed by the Honourable High Court Of Delhi through its decision dated 13th January, 2020 in W.P.(C) 5539/2019 (Arun Chhibber v. Union of India where in the Honourable court rejected the respondent’s (UOJ) contention that the judgment in P. Ayyamperumal had to be treated as one that was in persona and not in rem.”

Sir, The Democracy of our Country gives highest regards to the judicial pronouncements on their attaining legal finality and no one including DLA /DOPT has any authority to go contrary to it or misinterpret.

In the end BPS beg to remind the bureaucracy of oath to Preamble to constitution of India on and request them to ensure Justice and equality in the matter of pensioners/Sr Citizens. Not that only those who win through courts get the advantage and the other similarly placed who cannot afford to approach the court are deprived of the same benefit inspite of honorable Supreme court pronouncement not to do so.

Thanking you
Yours truly, 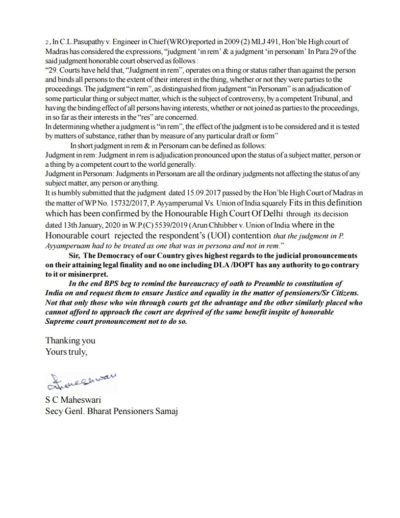 Non-Functional upgradation for Officers of organized Group ‘A’ Services – DOPT

Revised DA for Workmen and Officer Employees in banks for the months of Nov, Dec 2020 & Jan 2021