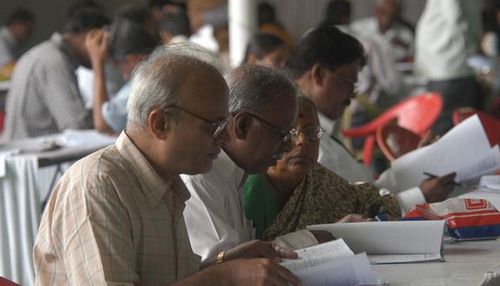 GOVERNMENT OF INDIA
MINISTRY OF PERSONNEL, PUBLIC GRIEVANCES AND PENSIONS (DEPARTMENT OF PENSION AND PENSIONERS WELFARE)

(a)       whether the Government has made any rule to give salary/pension to the Government employees after their retirement; and
(b)       if so, the details thereof?

(a) & (b) Central Government civil servants appointed before 1.1.2004 are governed by the Central Civil Services (Pension) Rules, 1972. In accordance with Rule 49 of these rules, on retirement after completing a qualifying service of not less than 10 years, a Government servant is entitled to a pension calculated @ 50% per cent of his last drawn pay or 50% of the average of last 10 months’ pay, whichever is more beneficial to him, subject to a minimum of Rs. 9,000/- per month and a maximum of Rs.1,25,000/- per month.

2. A Government servant appointed on or after 1.1.2004 is governed by the National Pension System. Under this system, a Government servant is required to mandatorily contribute during service 10% of his pay and dearness allowance to his pension account and an equal amount of 10% of pay and dearness allowance is contributed by the Government to the employee’s pension account. On retirement on superannuation, the retiring Government employee is mandatorily required to invest at least 40% of the accumulated pension wealth to purchase an annuity from an insurance company regulated by the Insurance Regulatory Development Authority (IRDA) and a maximum of 60% of the accumulated pension wealth is given to the individual in lump sum.

On retirement, all Government servants are entitled to a retirement gratuity based on their qualifying service subject to a maximum of Rs.20 lakh.

This was stated by the Minister of State for Personnel, Public Grievances & Pensions and Prime Minister’s Office, Dr. Jitendra Singh in a written reply to question in the Lok Sabha today.