CPAO OM for Incorporation of Aadhaar number in fresh Pension Payment Orders (PPOs) – Aadhar Number to be mentioned in all the papers of the PPO.

Central Pension Accounting Office has issued an OM for the incorporation of Aadhaar number in all the papers relating to Pension Payment Order. 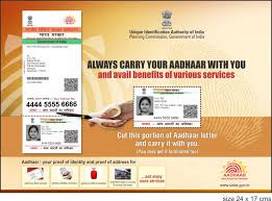 2. In view of Aadhaar Cards numbers crossing 100 crores marks and implementation of Aadhaar linked Biometric Attendance System in most of the central government offices, it is very unlikely that a retiring government servant will not have Aadhaar number. Further, DOPT vide its OM No. Z-20025/9/2014-Estt (AL) dated 03-11-2014 (Annex-III) had requested all Ministries/Departments to ensure that the Service Book of all employees have an entry of Aadhaar number.

3. In view of above, all Pr. CCAs/CCAs/CAs are once again requested to take up the matter with JS (Admn) and Heads of Offices of respective Ministries/ Departments to arrange for providing Aadhaar number in all pension papers to be submitted to concerned PAOs to enable them to incorporate the same in PPO booklets.