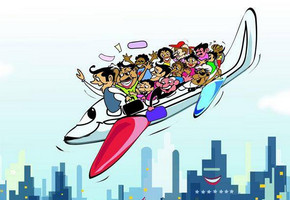 LTC by Air to North East Region, Jammu and Kashmir and Andaman Nicobar extended for a further period of two years

The undersigned is directed to refer to this Department’s O.M. of even No. dated 26.09.2014 on the subject noted above and to say that relaxation of CCS (LTC) Rules, 1988, to allow Government servants to travel by air to North East Region (NER), Jammu and Kashmir (J&K) and Andaman & Nicobar Islands (A&N) is extended for a further period of two years w.e.f. 26th September, 2016 subject to the following conditions:

(a) Travel by air to continue to be performed by Air India in Economy class at LTC-80 fare or less.

(b) For journey by air to Jammu & Kashmir, travel by any airline is allowed, however, the journey should be undertaken in Economy class at a fare less than or equal to LTC-80 fare of Air India.

(c) The condition that air tickets can be purchased either directly from the airlines (booking counters/website) or through authorized agents only viz., `M/s Balmer Lawrie and Co. Ltd.’, `M/s Ashok Travels and Tours Ltd.’ and `IRCTC’ (to the extent IRCTC is authorized as per DoPT’s O.M. No.31011/6/2002-Estt.(A) dated 02.12.2009), shall necessarily apply.

(d) Efforts should be made by the Government servants to book the air tickets at the cheapest fare possible. All the Ministries/ Departments are advised to bring it to the notice of all their employees that any misuse of LTC will be viewed seriously and the employees will be liable for appropriate action under the rules. In order to keep a check on any kind of misuse of LTC, Ministries/ Departments are advised to randomly get some of the air tickets submitted by the officials verified from the Airlines concerned with regard to the actual cost of air travel vis-a-vis the cost indicated on the air tickets submitted by the officials.

2. All other conditions prescribed in this Department’s O.M. of even no. dated 26.09.2014 shall continue to apply.

3. In their application to the staff serving in the Indian Audit and Accounts Department, this order issue after consultation with the Comptroller and Auditor General of India.