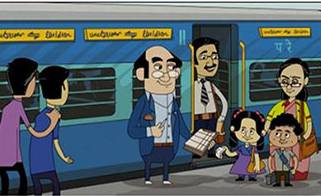 The cadre of Station Masters, nearly 39,000 strong, is one of the visible faces of Indian Railways. They are connected with working of traffic, commercial duties like issue of tickets, goods handling, parcel handling, accounting of station earnings. They are also responsible for proper co-ordination between personnel of different departments posted at the station. Theirs is presently a three-tier structure:

Some major stations have posts of Station Superintendent (Gazetted).

Presently the mode of recruitment is as follows:
·    SS–100 percent promotional

·    SM–10 percent through  Limited Departmental Competitive Examination (LDCE), from serving non-ministerial graduates of Commercial and Traffic Departments; 15 percent+Shortfall against LDCE through Direct Recruitment from the open market; 75 percent through promotions from ASM

·    ASM–25 percent through General Selection from specified serving matriculates in GP 1800, 1900, 2400 and 2800; 15 percent+Shortfall against General Selection through LDCE (from employees of specified categories of Commercial and Traffic Departments with qualification of graduation and a minimum service of 5 years for Group D staff); 60 percent+Shortfall against LDCE through Direct Recruitment from the open market.

The Commission notes that 7 percent of the entire cadre is presently in GP 2800, 53 percent in GP 4200 and 40 percent in GP 4600. Keeping in mind the identical educational qualifications required for the posts of ASM and SM, with practically no difference in the functions performed by them, and the historical importance of the post, it is recommended that the ASMs in GP 2800 should first be upgraded to GP 4200 and then fitted in the revised Pay Matrix. The cadre will then have 60 percent posts in Level 6 and 40 percent in Level 7.  The designation of ASM may be abolished. Separate recommendations have been made regarding Dress Allowance to Station Masters. Other demands like grant of Safety and Punctuality Allowance, Outturn Allowance are not justified.