News are pouring on the likely approval of 7th Pay Commission recommendations by Cabinet today.  It’s really a long journey right from February 2014, when 7th Pay Commission was constituted by Govt to look in to pay and service related matters of Central Government employees including Railway Employees, Defence Personnel and Pensioners (Central and Defence).  7th Pay Commission submitted its report in November 2015.  Subsequently, Govt formed Empowered Committee of Secretaries for processing the report of 7th Pay Commission.

All Staff Side associations and unions termed the 7th Pay Commission report as retrograde to Employees in the aspects of pay and service prospects.  During the meetings conducted by the Empowered committee,  NJCA, the joint body of staff side federations submitted memorandums for modification of the 7th pay commission recommendations in the areas of  minimum pay, fitment formula, annual increment, MACP, reversal of abolition of allowances proposed etc.

However, it is still unclear whether all the demands of Staff Side has been taken in to consideration by Empowered Committee since it has not provided any details relating to charter of demands submitted by NJCA. 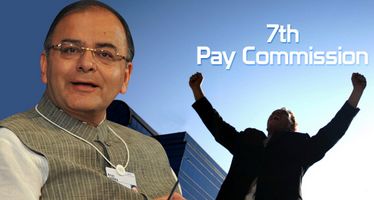 In this background, NJCA has called for all India indefinite strike of all Central Government Employees, Railway Employees and Civilian Defence Employees on 11th July 2016, against inaction of Govt on Staff Side’s demand for proper negotiation on 7th CPC report.

As per latest developments, it is reported that Empowered Committee has already submitted its report to Finance Ministry and that Prime Minister has directed the Finance Ministry to put up Cabinet Note for its review and approval on 29th June 2016.

Let’s keep our fingers crossed on whether the demands of Staff Side have been taken in to consideration.

We have given below, the 7th Pay Commission report in a nutshell, for easy re-visit of details by readers.

7th Pay Commission has formulated fitment formula as far as existing employees are concerned as 2.57. For instance, 7CPC pay of the employees who are presently in the pay band of 5200 – 20200 with grade pay of Rs. 1800, will be calculated by multiplying the factor of 2.57 with their existing basic pay (pay in pay band + grade pay)

7th pay Commission pay will be effective from 1st January 2016.

7th Pay Commission has recommended for Uniform Annual Increment of 3%

Existing Performance benchmarks for MACP is “Good”. 7th Pay Commission proposes that it should be “Very Good”. 10 years, 20 years and 30 years Slab continues.

Promotional hierarchy will be followed for granting MACP / Promotion

The Commission has also proposed that annual increments not be granted in the case of those employees who are not able to meet the benchmark either for MACP or for a regular promotion in the first 20 years of their service.

The Military Service Pay, which is a compensation for the various aspects of military service, will be admissible to the Defence forces personnel only. As before, Military Service Pay will be payable to all ranks up to and inclusive of Brigadiers and their equivalents. The current MSP per month and the revised rates recommended are as follows:

Short Service Commissioned Officers will be allowed to exit the Armed Forces at any point in time between 7 and 10 years of service, with a terminal gratuity equivalent of 10.5 months of reckonable emoluments. They will further be entitled to a fully funded one year Executive Programme or a M.Tech. programme at a premier Institute.

Lateral Entry/Settlement: The Commission is recommending a revised formulation for lateral entry/resettlement of defence forces personnel which keeps in view the specific requirements of organization to which such personnel will be absorbed. For lateral entry into CAPFs an attractive severance package has been recommended.

Systemic change in the process of Cadre Review for Group A officers recommended.

Levels as per the Pay Matrix

All non-interest bearing Advances have been abolished.

Regarding interest-bearing Advances, only Personal Computer Advance and House Building Advance (HBA) have been retained. HBA ceiling has been increased to ₹25 lakhs from the present ₹7.5 lakhs.

The Rates of contribution as also the insurance coverage under the CGEGIS have remained unchanged for long. They have now been enhanced suitably. The following rates of CGEGIS are recommended:

The  Commission  strongly  recommends  the  introduction  of  health  insurance scheme for Central Government employees and pensioners. In the interregnum, for the benefit of pensioners residing outside the CGHS areas, the Commission recommends that CGHS should empanel those hospitals which are already empanelled under CS (MA)/ECHS for catering to the medical requirement of these pensioners on a cashless basis. This would involve strengthening of administrative capacity of nearest CGHS centres. However, this step will go a long way in ameliorating the pending grievances of these pensioners.

The past pensioners shall first be fixed in the Pay Matrix being recommended by the Commission on the basis of Pay Band and Grade Pay at which they retired, at the minimum of the corresponding level in the pay matrix.

This amount shall be raised to arrive at the notional pay of retirees, by adding number of increments he/she had earned in that level while in service at the rate of 3 percent.

In the case of defence forces personnel this amount will include Military Service Pay as admissible.

Fifty percent of the total amount so arrived at shall be the new pension.

An alternative calculation will be carried out, which will be a multiple of 2.57 times of the current basic pension.

The pensioner will get the higher of the two.

The Commission has recommended for reverting to a slab based system for disability element, instead of existing percentile based disability pension.

7th Pay Commission has recommended for improving the present National Pension System in view of many grievances reported.

Earned Leave : No Change with respect to encashment

Leave No due : No Change

Status quo is recommended as far as GPF is concerned

On the whole, the Commission is of the view that quantum of CEA should be calibrated in such a manner that the main objective is met without the government entering into the field of subsidizing private education. Hence, taking into account the various items of expenditure
that are reimbursed as a part of this allowance, the following is recommended:

The allowance will continue to be double for differently abled children.

Also, the extension of scope of the allowance beyond Class XII was not accepted by 7th Pay Commission