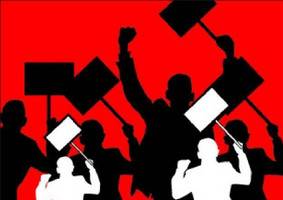 The General Secretaries of
Affiliated Unions of NFIR

Sub: Service of Strike Notice by NFIR Unions on the GMs of Zonal Railways / Production units-reg

In the NJCA meeting held on 3rd June 2016, after taking stock of the situation particularly in the context of Government’s failure to hold formal meetings and discuss on Charter of Demands for reaching a negotiated settlement, it has been decided that the JCM Constituent organizations shall seive Strike Notice on the respective employers/authorities.on 9th June,20l6 duly organizing massive rallies/demonstrations and proceed ahead for total mobilization of Central Government Employees/workers for Strike Action from 11th July, 2016.

In this connection, NFIR has already sent to the affiliates, the proforma of Strike Notice together with Charter of Demands to facilitate the Affiliated Unions to serve Strike Notice on the respective GMs etc on 9th June, 2016. It was also conveyed that copy of Strike Notice should also be sent to different authorities as indicated in NFIR’s letter of even number dated 31st May, 2016 through e-mail and also through speed post.

The affiliates of NFIR should mobilize Railway employees in a massive scale on 9th June, 2016 in the course of serving the Strike Notice. Media Conference should also be held and the Charter of Demands vis-ir-vis Government’s non-responsive attitude be highlighted for wider coverage.

The NJCA in its meeting held on 3’d June, 2016 has also decided as follows.

NFIR therefore appeals to all its affiliates to make all out efforts to enlist the support of employees of all categories for their total and successful participation in the Strike Action. It needs to be realized that the historic decision for launching Strike Action by all Central Government Employees is an opportunity for every employee/worker to demonstrate united strength of working class and emerge victorious in spite of Government’s onslaughts. We should get ready to face any challenge and establish that our united struggle has not only brought laurels but also become an unforgettable event, inspiring future generations of work force.

NFIR also appeals to its affiliates to take necessary initiatives as indicated above promptly in order to see that message goes all over that the united struggle of rail workforce is creating greater impact for the eventual success.

1. Settle the issues raised by the NJCA on the recommendations of the 7th CPC sent to Cabinet Secretary vide letter dated 10th December 2015.

2. Remove the injustice done in the assignment of pay scales to technical/safety categories etc., in Railways & Defence, different categories in other Central Government establishments by the 7th CPC.

4. i) No privatization / outsourcing / contractorisation of governmental functions ii) Treat GDS as Civil Servants and extend proportional benefit on pension and allowances to the GDS.

5. No FDI in Railways & Defence; No corporatization of Defence Production Units and Postal Department.

6. Fill up all vacant posts in the government departments, lift the ban on creation of posts; Regularize the casual/contract workers.

8. Extend the benefit of Bonus Act, 1965 amendment on enhancement of payment ceiling to the adhoc Bonus/PLB of Central Government employees with the effect from the Financial year 2014-15.

9. Ensure five promotions in the service career of an employee.

10. Do not amend Labour Laws in the name of Labour reforms which will take away the existing benefits to the workers.

11.Revive JCM functioning at all levels.

2. Scrap New Pension Scheme (NPS) and restore old pension scheme to he made applicable to those employed on & after 1.1.2004.

3. Settle NFIR”s Charter of Demands submitted to the Government and Ministry of Railways on 24.12,2013, 28.01.2014, 03.07.2014, 07.07.2014, 11.09.2015 & 10.12.2015 which include removal of anomalies of VI CPC, implementation agreements reached for merger of Technicians, grant up-gradation of Apex Group `C’ posts to Group `B’ Gazetted, replacement of Pay Band & GP of various categories, removal of salary calculation ceiling for ensuring payment of PLB on actual wages, grant of parity in case of stenographers with those working in Central Secretariat Services, reduction of duty hours, improvement in Railway Quarters, Medical facilities, creation of New Posts for New Assets/Services without insisting on matching surrender etc., Ensure career improvement of Safaiwalas/Safaiwalies in Railways SPAD definition to be reviewed to prevent harassment of victimization of Running & Safety staff, Absorption of Quasi-Administrative Units/Offices Staff against GP Rs. 1800/- (PB-1), Setting up of multi-disciplinary training institute to impart training in rail related electronic technologies to the wards of Railway employees, Induct Course Completed Act Apprentices against Safety vacancies etc.

5. Recall FDI notification of Government of India dated 22?d August, 2014 in construction, operation & maintenance of Indian Railways and scrap all agreements entered into with foreign Companies as well as National Companies which are detrimental to the interests of Railways & Nation.

7. Injustice done to Railway Employees like Technicians, Technical Supervisors, Loco and Traffic Running Staff, Operating Staff, Medical categories etc., in respect of allotment of 7th CPC Pay Matrix levels and promotional scope should be done away with and justice administered.

8. Ensure parity in pay structure & promotional scope for common categories with those working in the Central Secretariat/Ministries.