The Confederation of Central Government Employees and Workers, Karntaka Branch reports that Finance Ministry is in the job of calculating the financial implications as a result of increased pay and allowances over and above recommended by 7th Pay Commission. As per the report of one of the largest federations for Central Government Employees the focus of finance ministry is now in the following areas 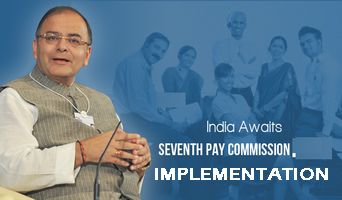 5. Grant of advances which are proposed for abolition by 7th Pay Commission

The full extract of this latest 7th Pay Commission related report released by Confederation is as follows
The empowered committee of Secretaries headed by the Cabinet Secretary had discussion from past five months on the charter of demands raised by the staff side. The finance ministry is working out the financial implications arising out of the improved  recommendations of the 7th CPC especially on the minimum wage and fitment formula being improved, granting two  increment on promotion and having annual increment on 1st Jan and 1st July instead of just on 1st July.  This will benefit a lot of persons on promotion. The other aspect is considering grant of advances, which the 7th CPC has recommended for abolition.

The formal announcement by the of the 7th CPC acceptance is likely to be made by the Government just before the 11th July strike by the CG employees indicating the actual minimum wage and fitment formula.

The cabinet Secretary will present the view of the empowered committee of Secretaries before the Union Cabinet meeting based upon the principle adopted in actual calculation of the minimum wage and fitment formula. The 7th CPC had adopted the Dr Aykroyd formula   minimum wage is calculated on the basis of the 15th ILC norms. But erred in many aspects for example the average of   prices of last 12 months was taken, The housing weight age , education weight age etc  . The prices of essential items are rising from past many years, even in last six months the retail inflation is rising above 5.4%.

Secondly the prices quoted by the  GOVERNMENT OF INDIA MINISTRY OF LABOUR & EMPLOYMENT LABOUR BUREAU CLEREMONV, SHIMLA http://Labourbureaunew.Gov.In/ ,  the Director of Economic & statics , Ministry of Agriculture and Farmers Welfare, Government of India, New Delhi & the retail market prices are varying .

If we calculate the minimum wage based upon the  LABOUR & EMPLOYMENT LABOUR BUREAU taking prices as on 1stJuly 2015 the minimum wage works out to Rs 21,000 / and fitment formula works to 3.00. This will result in 34% wage hike without allowances.

If we calculate the minimum wage based upon the  Director of Economic & statics , Ministry of Agriculture and Farmers Welfare, Government of India, New Delhi  taking prices as on 1st July 2015 the minimum wage works out to Rs 23,000 / and fitment formula works to 3.30. This will result in 50% wage hike without allowances.

If we calculate the minimum wage based upon the retail market  taking prices as on 1st July 2015 the minimum wage works out to Rs 28,000 / and fitment formula works to 4.00. This will result in 70% wage hike without allowances.

The most important demand is that of the CG employees is the minimum wage and fitment formula.

This increase is lowest by any pay commission, hence vast changes are required as the prices of essential commodities have gone up and also the inflation rate has gone up.

Comrades it is the time to struggle, we should educate the members and prepare for struggle, so that we should get at least 50 % wage hike without allowances, as allowances are not taken into pension benefit.

Only struggle will get us benefit. Please don’t believe on rumours. Now it is now or never.