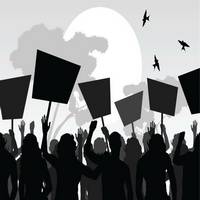 As per the decision taken by the NJCA (National Joint Council of Action of Central Government Employees Organisations), Confederation of Central Government employees and workers and all its constituent Associations/Federations in the Postal, Income Tax, Audit, Accounts, Ground Water Board, Printing and Stationery, Survey Departments, Atomic Energy, Central Secretariat, Central Excise and Customs etc. served the strike notice on their respective head of Departments yesterday the 9th June, 2016 protesting against the recommendations of the 7th pay commission.

At Delhi massive demonstrations were held at Dak Bhawan, Central Revenue Building (ITO) and many other places. The NJCA includes all Associations and Federations of Departments of the Government of India, including Defence and
Railways, Postal, Income Tax, Audit, Accounts etc. About 35 lakh Central Government employees are expected to take part in the indefinite strike action which as per the notice will begin from 11th.July, 2016.

‘The 7th Central Pay Commission submitted its report on 19th November, 2015, after a delay of three months from the stipulated period of 18 months given to them. The three months delay was also caused by the intervention of the Present Finance Minister.

It is now more than six months the report is with the Government. The entire 35 lakh workers and the Civil Servant pension community was extremely unhappy over the recommendations of the 7th CPC which did not address the core issues presented before them and the wage revisions suggested by the Commission was the lowest in the post independent history of the country. A meagre rise of 14% alone was recommended by the Commission to be effective for a long period of ten years. The Government has so far failed to take note of the anger and anguish of the employees in the matter as the wage rise recommended in the face of the unprecedented rise in the inflation during the period between 2oo6 and 2016. The Government did not either grant any interim relief or even a small financial benefit in the form of merger of DA which at the setting up of every earlier Pay Commission the Government had adhered to.

The strike which commences on 11th July, 2016 shall be the largest participated strike action in the independent India as more than 35 lakhs civil servants are expected to join the strike action.

The entire pension community belonging to Civil Pensioners have decided to join the struggle for the Government has indicated that it will not be able to implement the recommendation of the 7th CPC concerning pensioners on the flimsy ground that relevant document required for the revision might not be available with them.’