Confederation of Central Govt. Employees and Workers strongly oppose the move of Government of India to unilaterally and arbitrarily imposition of provisions of rules FR 56 (J) and rule 48 (h) pension rules to retire the Govt Employees prematurely and forcibly vide the OM No. 25013/03/2019-Estt-A IV dated 28. August 2020 issued by Department of Personal and Training, Govt. of India.

The above mentioned OM gives the power to Government to cause premature retirement of any Govt. official who has completed 30 years of service and attained age of 50/55 years on various vague grounds as such “doubtful integrity”, “ineffectiveness” and When petty allegations.

This OM gives infinite power to the authority to pick and choose the targeted employees for such forced premature retirement. The victim employee will not be given any opportunity to explain as natural justice demands. After retirement, he can approach advisory committee appointed by the Govt. of India.

This shows the autocratic attitude of Govt. of India towards the bask rights of employees and unions and in violation of Labour laws.

Confederation of Central Govt. Employees and workers strongly oppose such an authoritarian and arbitrary move of Govt. of India and demand for withdrawal the said OM forthwith.

If this OM is not withdrawn the Central Govt. Employees will be compelled to launch serious agitational programmes. 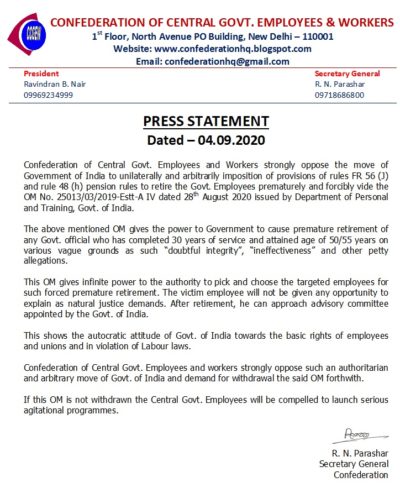