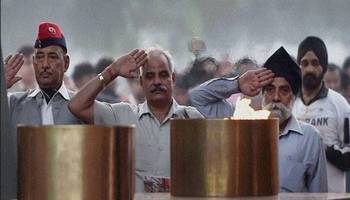 The government has enhanced penury grant to non-pensioner Ex-Servicemen/Widows to Rs. 4,000/- per month from the existing rate of Rs. 1,000/- p.m., payable from April 2017. The Defence Minister Shri Arun Jaitley approved the enhancement of the penury grant following the demands by different stake holders, including Ex-servicemen Associations, Rajya Sainik Boards, Ex-servicemen/widows. Recently, the Governor of Jammu and Kashmir, Shri N N Vohra had also sent a proposal to Shri Jaitley to increase the amount to Rs. 4,000/-.

The penury grant is provided to non-pensioner Ex-servicemen/widows, who are above 65 years of age by the Department of Ex-Servicemen Welfare, Ministry of Defence through Kendriya Sainik Board.

The step of enhancement of penury grant will benefit a large number of non-pensioner Ex-servicemen and widows who are in a state of penury. It was last revised from one time grant of Rs. 30,000/- to Rs. 1,000/- per month in October 2011.
Source : PIB