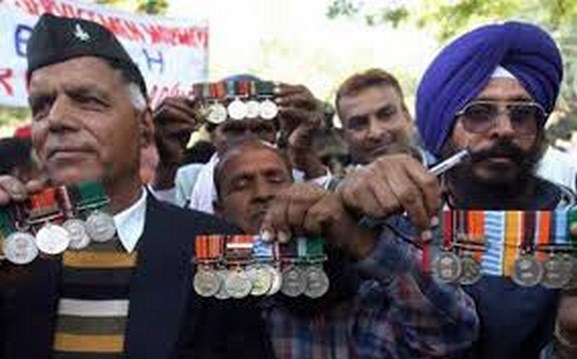 Subject:- Implementation of ‘One Rank One Pension’ to all Pre–01.06.1953 Defence pensioners, Ex. State Force Pensioners and their families.

Under the extant Government Orders , revision of pension under OROP scheme shall be effective with effect from 0 1.07.2014 , and payment of arrears accrued on account of revision of pension, if any, shall be made in a time bound manner as stipulated in Para 17.1 of the Circular No. 555 dated 04. 02.2016.

2. In this regard, it is stat ed that as per Para 4 of Gol, MoD letter No.12(1)/2014/D (Pen/Policy)-Part-II dated 03.02.2016 circulated vide this office Circular No. 555 dated 04.02.2016, provisions of OROP are also applicable to pre-01.06.1953 retirees pensioners, Ex-State Forces pensioners and their families for revision of pension/family pension. Accordingly, the benefit of ORO P also has to be given to Ex-State Forces Pensioner s/Family Pensioner s as per applicable tables, who were in receipt of pension as on 01.07.2014.

4.Therefore , to expedite the timely revision of pension in respect of all Pre-01.06.1953 pensioners, Ex-State Force Pensioners and their families, the Pension Disbursing Agencies are hereby authorised to revise the pension of all Pre-01.06.1953 pensioners, Ex State Forces Pensioners and their families as per the rates applicable to Regular Armed Forces Personnel without any Corr. PPOs.

6.This Circular has been uploaded on this office website www.pcdapension.nic.in for dissemination to all concerned.