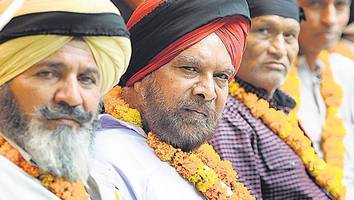 2. Representations from various agencies as well as pensioners/family pensioners including Pension Disbursing Agencies are being received for clarification on Payment of dearness relief to re-employed pensioners and employed family pensioners. The matter has been examined in this office and following points are clarified.

(i) In so far as re-employed pensioners are concerned, the entire pension admissible is to be ignored at present only in the case of those civilian pensioners who held post below Group ‘A’ and those ex-servicemen who held post below the ranks of Commissioned Officers at the time of their retirement. Their pay, on re-employment, is to be fixed at the minimum of the pay scale of the post in which they are re-employed. Such pensioners will consequently be entitled to Dearness Relief on their pension.

(A) For this purpose, the Central Government Departments concerned, including subordinate organizations. State Government, Corporation/Company/Body/Bank etc. employing a Central Government pensioner shall be required to issue of certificate indicating the following:

(a) The re-employed pensioner retired from a civil or military post in the Central Government and was holding a post not included in classified as group ‘A’ or a post below the rank of commissioned officer in the armed forces;

(b) The entire amount of pension sanctioned by the Central Government was ignored in fixation of the pay on re-employment i.e. no part of the pension was taken into account in such fixation of pay in the pay scale of the post in which the Central government retired/retiree was re-employed/absorbed; and

(c) The pay of the re-employed/absorbee was/is fixed at the minimum of the pay scale of the post in which he had/has been initially re-employed after his retirement from the Central Government.

(d) If the pay fixed at a higher stage because of advance increments and no protection of the last pay drawn is being given.

(B) In the cases where PBOR (below Commissioned Officer) retired before attaining the age of 55 years and re-employed thereafter and their pay fixed at a higher stage because of advance increments and no protection of the last pay drawn were given, the pay should be treated as fixed at a minimum for the purpose of ignoring the entire pension and allowing Dearness Relief on pension. For benefit of advance increments, the policy for the same should exist in the re-employing department and a copy of such policy matter should be enclosed with the required certificate. But, after granting benefit of advance increments, the last pay drawn by the pensioner is protected, the pensioner in such case will not be entitled for dearness relief on pension.

(ii) In all other cases of re-employed pensioners, no dearness relief shall be admissible on pension during the period of their re-employment.

(iii) (A) In terms of the existing orders on the subject, the pay of re-employed pensioners who held Group ‘A’ post or posts of the ranks of Commissioned Officers at the time of their retirement is to be fixed at present

(B) Further, the pay on re-employment is required to be fixed after ignoring only a portion of the pension as revised time to time received for the previous employment. In view of the fact that (i) the pension is taken into account in such cases and not entirely ignored; (ii) The pay in the post of re-employment is not required to be fixed at the minimum of the scale in all cases; and (iii) Dearness Allowance at the rates applicable from time to time is also admissible on the pay fixed in terms of the orders on the subject, these re-employed pensioners will not be entitled, in addition, to any Dearness Relief on their pension.

(v) Payment of dearness relief where discontinued due to re-employment, shall become admissible only with effect from the date they cease to be re-employed. The Pension Disbursing Authority shall require such a pensioner to produce certificate of cessation of re-employment from the office in which the pensioner had been re-employed.

(vi) However, dearness relief is payable to those re-employed pensioners who get consolidated pay without dearness allowance, consolidated fee, daily wages, or elected as Members of Legislative Assembly or Parliament, Ministers/Deputy Ministers of Central or State Government, Indian Red Cross Society and Extra Departmental Agents in the Department of Post.

(vii) As regards employed family pensioners, since the family pension received by the eligible dependents of Central Government employees is, in any case, not taken into account in determining their pay on employment, Dearness Relief at the rates applicable from time to time shall be admissible