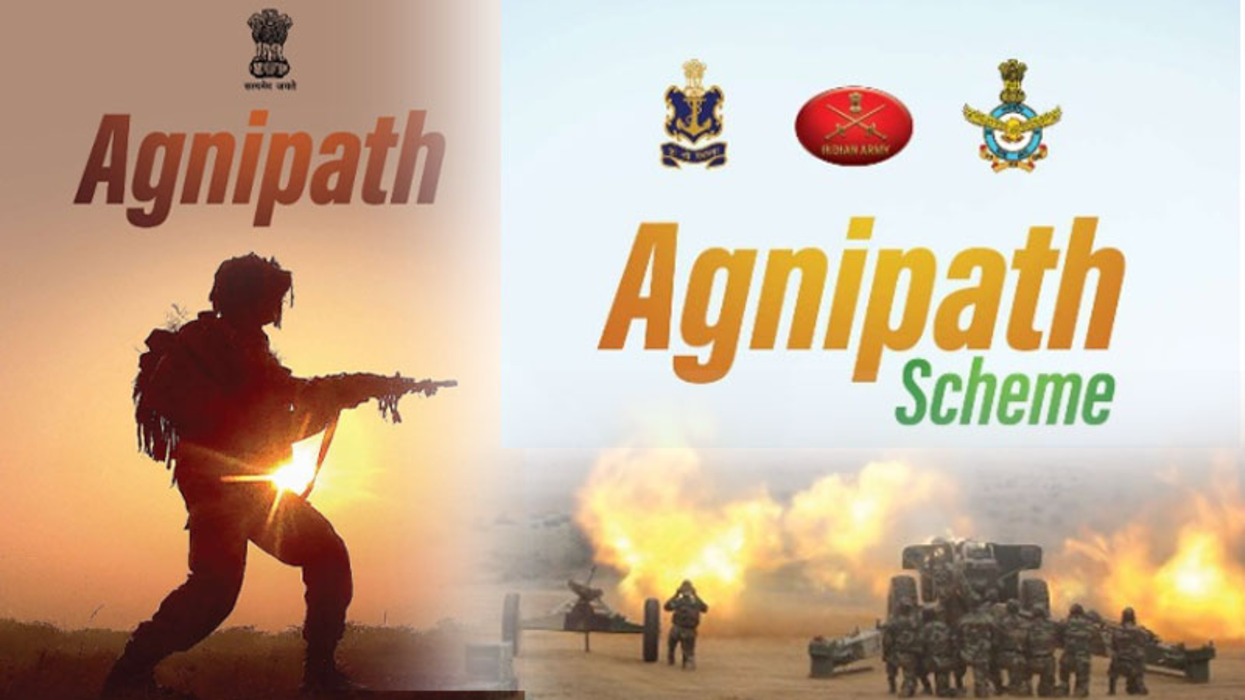 Payment of Ex-gratia in case of death of Agniveers enrolled under the Agnipath Scheme, 2022: Ministry of Defence Order dated 05.12.2022

Subject: Payment of Ex-gratia in case of death of Agniveers enrolled under the Agnipath Scheme, 2022.

I am directed to refer to Ministry of Defence létter no. DMA/JS (N&DS)/2021/Agnipath-01 dated 15.06.2022 on the above subject and to state that in pursuance of the Government’s decision to implement the Agnipath Scheme, 2022, the death of an Agniveer has been categorized and accordingly Ex-gratia will be granted to the Next of Kin of the Agniveer. The details of categorization of death and payment on death are as follows:

2. The provision of grant of ex-gratia takes into account the hardships and risks involved in certain assignments, the intensity and magnitude of the tragedy and deprivation that families of government servants experience on the demise of the breadwinner in different circumstances, the expectation of the employer from the employees to function in extreme circumstances, etc. The compensation is intended to provide security to employees who are required to function under trying circumstances and are exposed to different kinds of risks in the performance of their duties.

3. The Powers to Sanction ex-gratia payment under this order is with AG/CoP/AOP in case of Army, Navy and Air Force respectively, in consultation with PIFA (Principle Integrated Financial Advisor). Thereafter payment will be released to NoK by CPAO (New Delhi), NPO and AFCAO in respect of Army, Navy and Indian Air Force. Agniveers. Further, in case of any disagreement, regarding grant of Ex-gratia to Nok of Agniveer, the matter will tie decided by Department of Military Affairs, not below the rank of Additional Secretary.

4. The conditions and guidelines to be observed for grant of ex-gratia in terms of these orders are indicated in the Annexure-I.

5. The definition of the Bonafide official duty is annexed at Annexure-2.

Conditions governing the payment of ex-gratia and guidelines to be observed:

The main condition to be satisfied for the payment of the ex-gratia in the specified circumstances is that the death of the Agniveer concerned should have occurred in the actual performance of Bonafide official duties. In other words, a causal connection should be established between the occurrence of death and government service.

2. Powers having been delegated to the AGICOP/AOP in case of Army, Navy and Air Force, respectively, to sanction ex gratia payments under these orders, it shall be their responsibility as well as that of the Principal Integrated Financial Advisers (P/FAs) to satisfy themselves that the death of an Agniveer to be compensated by the payment of the ex gratia to the family in fact occurred in the actual performance of Bonafide official duties and to establish its causal connection and nexus with government service. This could be done on the basis of medical and other documents relating to the case.

3. Even if an Agniveer had died in such circumstances that a medical report could not be secured, the nexus and causal connection with government service would need to be adequately established in determining the entitlement to the ex gratia lumpsum payment. In deciding this Issue, all evidence (both direct and circumstantial) shall be taken into account and the benefit of reasonable doubt should be given to the claimant. The benefit of reasonable doubt will be extended more liberally in field service cases.

4. In cases of accidents to commercial aircraft resulting In the death of passengers, compensation |s payable to the next of kin by the national or private airline concerned in terms of international conventions. The ex-gratia in terms of these orders will, therefore, not be admissible in addition in the event of death due to accidents while travelling on duty by commercial aircraft and shall be restricted only to those cases where death occurs in an accident while travelling on duty by service aircraft. The payment of ex gratia in these cases will be without prejudice to the bond required to be executed by the Agniveer, if any, indemnifying the Government against any claims on account of death while travelling by service aircraft.

6. Ex Gratia compensation under para 1 (a) & {b) of these orders will be admissible to an Agniveer killed while employed in aid of the civil administration in quelling agitations. protest demonstrations. riots. etc.. regardless of whether such agitations. demonstrations. etc. are resorted to by members of the public, political parties. etc. or by other public servants. including police personnel. In addition. on the context of 4 perceptible increase in violence-related incidents over tie years, An Agniveer on duty could become unwitting victims of bomb basis in public places or vehicles, indiscriminate shooting incidents in public. etc, often resorted to by terrorists, anti-social elements, etc. The compensation under para 1 (a) & (b) of these orders will also, therefore, be admissible in cases of death in such incidents, provided the Agniveer concerned were actually on duty at the elevant time.

7. Families of Agniveer killed after being kidnapped by militants. terrorists, extremists, eic because of their official position or with a view to Spreading terror will also be entitled to the compensation under these orders.

8. Cases of death resulting from acts of violence or assault by terrorists, anti-social elements, etc. against an Agniveer with the intention of deterring or preventing him from performing his duties: or because of any act done or attempted to be done by such Agniveer in the lawful discharge of his duties or because of his official position will also be covered under para 1 (a) & (b).

9. In case of any doubt in regard to the applicability of the ex gratia compensation scheme, such cases will be referred to the Department of Military Affairs (CMA) and these matters be decided by DMA, not below the rank of Additional Secretary.

10. Ex-gratia shall be admissible in addition to other benefits like non-contributory insurance and Seva Nidhi.

11. In determining the admissibility of the ex-gratia payable from Central Government funds, ex-gratia payments, if any, made to families of the deceased Agniveer from State funds by the State Government concerned shall not be taken into account and shall be excluded.

12. In certain cases, relief is also provided to families of deceased Agniveers from sundry Government sources, such as the Prime Minister’s Relief Fund, Chief Minister’s Relief Fund etc. In such cases, it should be ensured that the aggregate of the relief/ ex-gratia paid from different sources does not exceed Rs.9 Lakhs in each individual case.

13. in view of the fact that the ex gratia in terms of these orders is payable to the families of the deceased Agniveer default or contributory negligence, if any, on the part of the Agniveer concerned shall not be taken into account in sanctioning the compensation.

14. Where any doubt arises as to the interpretation of the provisions of these orders. It shall be referred to the Department of Military Affairs (DMA) and these matters be decided by DMA. not below the rank of Additional Secretary.

DEFINITION OF BONAFIDE OFFICIAL DUTY IN RESPECT OF CASES COVERED UNDER LETTER NO. 1(21)2022/D(PAY/SERVICES) DATED

(a) An Agniveer subject to the disciplinary code of the Armed Forces shall be treated on ‘Bonafide Official duty’:

a. When performing an official task or a task failure to do which would constitute an offence, triable under the disciplinary code applicable to him.

Note 1: An Agniveer participating in local/ national/ international sports tournaments as member of service teams or mountaineering expeditions/ gliding organized by service authorities, with the approval of Service HQs, shall be deemed to be ‘on Bonafide duty’ for the purpose of grant of ex-gratia.

Note 2: An Agniveer participating in sports tournaments or in privately organized mountaineering expeditions of indulging in gliding as a hobby in their individual capacity, shall not be deemed to be ‘on Bonafide duty’ for the purpose of grant of ex-gratia lump sum compensation, even though _ prior permission of the competent service authorities may have been obtained by them.

Note 3: An Injuries sustained by Agniveer in impromptu games and sports which are organized by or with the approval of the local service authority and death or disability arising from such injuries, will be regarded as having occurred ‘on Bonafide duty’ for the purpose of grant of ex-gratia.

Note 4: An Agniveer deputed for training at courses conducted by the Himalayan Mountaineering Institute, Darjeeling and other similar institutes shall be treated at par with personnel attending other authorized professional courses or exercise for the Defence Services for the purpose of grant of ex-gratia on account of death sustained during the courses.

Note 1: An Agniveer while travelling between his place of duty to leave station and vice-versa is to be treated on duty irrespective of whether he has availed railway warrant/ concession vouchers/ cash TA etc or not for the journey. This would also include journey performed from leave Station to duty station in case the individual returns early.

Note 2: The occurrence of death should have taken place in reaching the leave station from duty station or vice versa using the commonly available/ adopted route and mode of transport.

e. When travelling by a reasonable route from one’s official residence to and back from the appointed place of duty, irrespective of the mode of conveyance (whether private or provides by the Government).

f. Death which occurs when an individual is not strictly ‘on duty’ e.g. on leave, including cases of death as a result of attack by or action against extremists or anti-social elements may also be considered attributable to service, provided that it involved risk which was due to his belonging to the Armed Forces and that the same was not a risk faced by a civilian. Death due to personal enmity is not admissible.