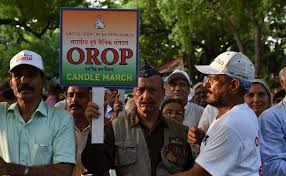 One Rank One Pension – PMO Instructs Minister to discuss the issue With Veterans – Based on this assurance the site was vacated and the protesters returned to Jantar Mantar, Col Kaul added.

In a late development on Sunday night, ex-servicemen protesting outside Finance Minister Arun Jaitley’s residence over the issue of One Rank One Pension (OROP) called off their protest after assurance from the Minister of State for Finance Jayant Sinha.

Veterans who have been protesting at Jantar Mantar from several months over discrepancies in the government notification, on Sunday, moved their protests outside Mr. Jaitley’s residence. They said that Mr. Jaitley in an earlier meeting on January 3 had promised to address their concerns in a week but failed to so.

Col Kaul said that despite the late hours Mr. Sinha was instructed by the Prime Minister’s Office (PMO) to discuss the issue and request the veterans to call off the dharna.

While efforts to reach Mr. Jaitley who is out of the country did not fructify, it has been learnt that Mr. Sinha assured to contact him at the earliest and inform the veterans accordingly. “He further confirmed to the delegation that a meeting would take place by Wednesday for an unlimited time to resolve the total details of the issue,” Col Kaul observed.

Based on this assurance the site was vacated and the protesters returned to Jantar Mantar, Col Kaul added.

On November 7 the government issued the formal notification implementing the long pending demand of OROP for military personnel. However veterans rejected it stating that it deviated on various issues including the definition of OROP as accepted by the Parliament.