One Rank One Pension – PIL Seeks Review of OROP Scheme – The PIL has also sought extension of the term of the one-man commission of L. Narasimha Reddy. 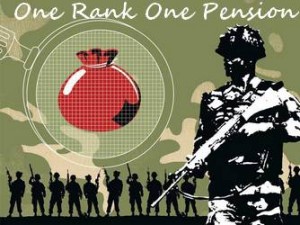 A plea filed in the Delhi High Court has asked for the One Rank One Pension scheme to be reviewed and a public hearing to take note of the grievances of ex-servicemen.

Chief Justice G. Rohini and Justice Jayant Nath have now ordered for the PIL to be listed before another Bench today.

The PIL has also sought extension of the term of the one-man commission of L. Narasimha Reddy, who was former Chief Justice of the Patna High Court. The Commission was instituted to review the ‘One Rank, One Pension’ scheme after several veterans of the Army objected to it.

Filed by ex-serviceman S.P. Singh, the PIL sought directions to the Ministry of Defence (MoD) and the Commission “to give an effective public hearing to those affected or aggrieved by implementation of One Rank One Pension (OROP)”.

According to the petition, a letter from the Ministry of Defence dated April 13, 2016, said: “Defence Forces pensioners/family pensioners, Defence Pensioners’ Associations can submit their representation, suggestions/views on the revised pension as notified, to the MoD, through post or by email within 15 days i.e. by April 29, 2016”.

The petitioner also claimed that the notice was not published in newspapers, as a result of which most people did not know about it. It also said that the time given to submit grievances and suggestions was very little, and that asking those the scheme will affect to forward their grievances to the Ministry was “unfair and in violation of principles of natural justice”.

It also said that the mechanism for consultation only allowed written representations, which violated “the basic concept of effective hearing”.

The petition also said that the Central government did not provide the address and contact information of the Commission despite “repeated requests”, due to which those affected by the scheme would not be able to put their objections before it ahead of the mid-June deadline.