Labour Bureau, Government of India has released the All India Consumer Price Index for Industrial Workers (AICPI-IW) for April 2015. As against the flat and reducing Trend CPI-IW in the recent past, the index has increased by 2 points and moved from 254 to 256.

In the press release issued by Labour Bureau yesterday, it is stated that maximum upward pressure to the change in current index came from Food group. This increase in these commodities may be due to recent hike in fuel prices 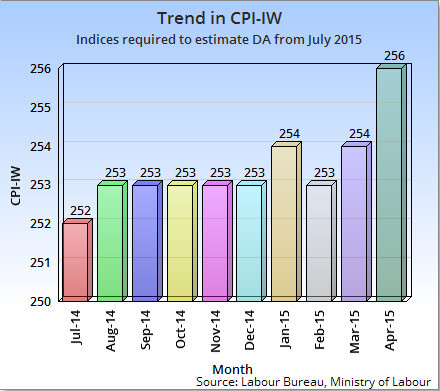 In our earlier estimation 4 scenarios were assumed viz.,

Scenario I : Flat Consumer Price Indices or one or two point decrease,

Scenario II and IV can be negated straightaway with following observations in respect of those possibilities.

(i) Scenario II in which DA of 117% predicted will not be possible as Flat Consumer Price Index trend has changed with increase of one and two point in the month of March 2015 and April 2015 respectively.

(ii) Scenario IV in which DA of 120 % was discussed is also not possible as it would require 4 point increase and 3 point increase in CPI in the months of May 2015 and June 2015 respectively.

Then which Scenario will come to reality ? Scenario I ? or Scenario III ? 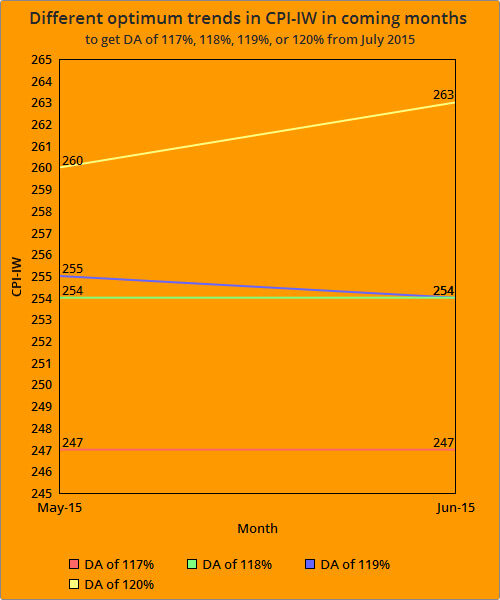 Press Release of Labour Bureau on All India Consumer Price Index (AICPIW-IW) for April 2015 is as follows:

At centre level, Srinagar reported the highest increase of 9 points followed by Bhilai (5 points). Among others, 4 points increase was observed in 14 centres, 3 points in 9 centres, 2 points in 14 centres and I point in 18 centres. On the contrary, Giridih centre recorded a maximum decrease of 6 points followed by Guntur (3 points) and Ranchi-Hatia and Godavarikhani (2 points each). Among others, 1 point decrease was observed in 8 centres. Rest of the 9 centres’ indices remained stationary.

The indices of 36 centres are above All India Index and other 42 centres’ indices are below national average.

The next index of CPHW for the month of May, 2015 will be released on Tuesday, 30th June, 2015. The same will also be available on the office website www.labourbureau. gov. in.