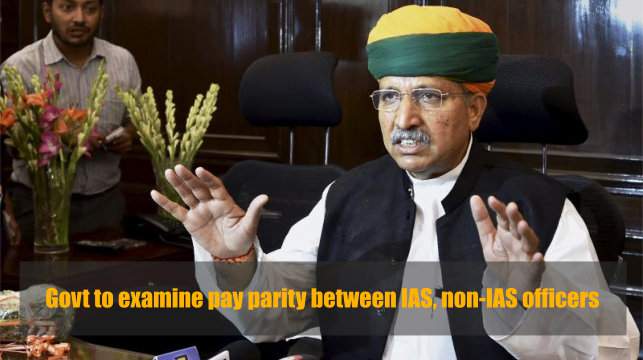 The parliament was informed on the 18th that since the 7th Pay Commission was not able to arrive at a consensus over the issue of pay parity between IAS and non-IAS officers, the matter will now be examined in detail by the department concerned.

In a written reply to Rajya Sabha, Minister of State for Finance Arjun Ram Meghwal said, “7th Pay Commission could not arrive at a consensus on this issue (parity between IAS and non-IAS officers). Therefore, the matter will be examined by the concerned department in detail for further consideration”.

He said employee associations of central government had given a call for strike with effect from July 11, 2016 which has been deferred.

“However, the government is responsive to the concerns of the Employees Association and it would be the endeavour of the government to ensure that the eventuality of a strike does not arise,” the minister said.

The government has decided to implement the recommendations of the 7th Central Pay Commission. The minister said the increase in pay as recommended by the Commission is based on the detailed deliberations keeping in view all relevant factors.

The three-member Seventh Pay Commission was divided over the issue of financial and career-related edge given to IAS officers as against those belonging to the other services.

Presently, the IAS officers get a two-year edge over other services for getting empanelled to come on deputation at the Centre.

A confederation representing thousands of officers of 20 civil services, including Indian Police Service (IPS) have asked the government to give equal pay and job-related opportunities enjoyed by those in IAS.