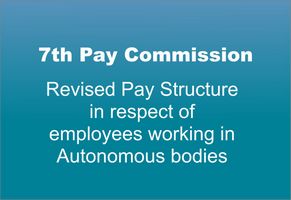 Ministry of Commerce and Industry

With reference to the above mentioned subject, it is . informed that the proposal of extension of the revised pay scale of 7th CPC to the employees of autonomous bodies is under consideration of Finance Division, Department of Commerce. The benefits of 7th CPC and enhanced Dearness Relief to the pensioners will be considered after finalization of the pay scales of the employees of the Autonomous Bodies in accordance with 7th CPC.