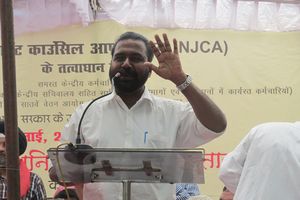 In this connection, Mr. Krishnan, Secretary General, Confederation of Central Government Employees and Workers has stated that in view of reply of Finance Minister in the parliament Empoyees need not come to a conclusion that 7th Pay Commission Multiplication Factor will not not be increased as he has used the term “at present”.

Further Mr.Krishnan has opined that Govt is concerned about Indefinite Strike action of Central Government Empoyees in the event of no increase in 7th Pay Commission Multiplication Factor.

The Finance Minister has made it clear that “the government is responsive to the concerns of the Employees’ Associations and it would be the endeavor of the Government to ensure that the eventuality of a strike does not arise.”

Regarding increasing of the multiplication factor, the Finance Minister replied that:

“no such proposal is under consideration of the Government, at present’

The assurance given to the NJCA leaders by the Group of Ministers (including Finance Minister) on 30-06-2016 is that enhancement in minimum pay and fitment factor (multiplication factor) will be considered favourably by the Government, once the proposal in this regard is submitted to Government by the proposed “High Level Committee” within four months. Hence, the matter will come for the  “consideration” of the Govt. only after submission of the report by the High Level Committee.

In that sense, technically, the reply of the Finance Minister that “at present” there is no such proposal under consideration of the Government, may not be taken in a different manner and we need not jump into the conclusion that multiplication factor will not be increased.

However, giving due importance to the concerns expressed by many of our comrades and grass-root level leaders, the NJCA will discuss this issue shortly and take appropriate decision. NJCA is keenly observing the move of the Govt. and any going back from the assurances given by the Group of Ministers or any betrayal of 33 lakhs Central Govt. Employees and 40 lakhs pensioners by the NDA Govt., shall result in revival of the deferred strike by the NJCA and Government will be solely responsible for all consequences.