PFRDA has enabled e-NPS for the benefit of Government Sector Subscribers & the associated Nodal offices vide our Circular no. PFRDA/2021/34/SUP-CRA/1 Dated 23 August 2021.

2. e-NPS Govt provides the opportunity for the employees of Government Sector and empowers them to open NPS Acct with ease and lot of convenience in a paperless mode. Till date, nearly 9000 accounts are opened across various Accounting formations (refer to Annexure I) of the Central Government & State Government. The data related to accounts opened through non-e-NPS channels for the corresponding period also provided. Currently e-NPS Govt is largely used by Central Autonomous Bodies (CAB) followed by Civil & Defence
Ministries.

3. The major benefits of e-NPS Govt. are faster account opening, higher efficiency and brings operational finesse to the nodal offices due to the paperless process & optimizing their time due to non-deposit of the physical account opening forms to CRA FC which are collected in other modes of acct opening. Since e NPS – Government significantly reduces the turnaround time (TAT) for Acct opening, the monthly contributions of NPS for the employees can be invested timely which lead to higher investment returns for the benefit of Subscribers.

4. It was proposed that e-NPS for Government shall be made mandatory w.e.f. 1/4/2022. However, it is observed that still various depts/nodal offices under Govt sector yet to adopt e-NPS Government holistically for the on-boarding of new employees.

5. All Govt. Nodal officers of State/Centre/Autonomous Bodies are once again informed to adopt e-NPS Government for on-boarding their new employees in order to align with the goal of Govt. of India’s Digital India program to transform India into a digitally empowered society wherein its Citizens are not required for physical submission of documents & certificates. Adoption of e NPS Government also brings various benefits for stakeholders and employees as provided in Annexure II. 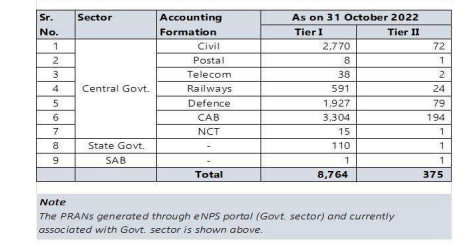 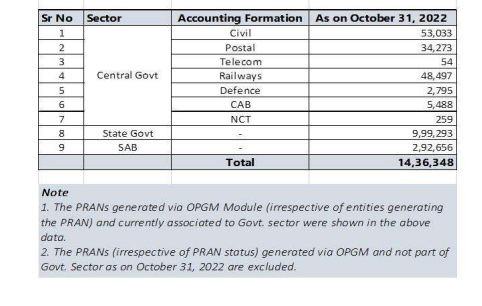 1. Ease of on-boarding of employees and online verification/authorization of employee NPS information by Nodal Offices.

2. Easing the work of Nodal Offices from manual process of account opening and freeing them from handling papers and associated challenges of dispatching the physical forms to CRA/ CRA FC.

3. Paperless process of enrollment with eSign/OTP.

4. Optimizing the cost of Account opening by end to end digitization.

7. Since employees fill the data in eNPS portal themselves while on boarding, data entry/digitization errors may come down resulting in decline in rejection of forms.