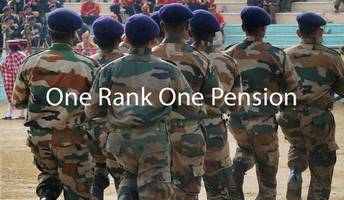 Pensioners are advised to convert their existing Bank account to E or S mode including their legal heir in the Bank account, so that in case of sudden demise the pension amount will reach the nominee.

The undrawn pension of a deceased pensioner paid to the Family pensioner or the Nominee or his Legal heirs is called LTA. Since the O.R.O.P arrears are paid in Four installments, and most of the beneficiaries are aged, it is likely that they may miss the remaining installments. Therefore, the legal heirs of the aged pensioners are to be more vigilant in claiming the O.R.O.P arrears as LTA. Every pensioner must submit nomination or convert their pension account into Joint account (E or S) immediately. They should also inform their legal heirs about the amount of future installments and probable payment dates.

The mistake is detected only when the family approaches for family pension. In the case of death of a family pensioner, the over paid pension after the death of the family pensioner remain as it is with the bank. None of the legal heirs comes forward to close the account. In normal days, it is ignored as the amount involved is less. But now the significance of LTA has become more important for the family pensioner because of the O.R.O.P arrears which is due in half yearly installments.

O.R.O.P has been implemented from 1.7.2014. The arrears of OROP of a pensioner who died before receiving the same will have to be paid to his wife as LTA. In case of a family pensioner, the OROP arrears will be paid to the Nominee or Legal heir. As on today, none of the bank will pay the OROP arrears of a deceased pensioner of their own. Unless and until, the concerned people are more vigilant, and claim they will never get.

In addition to O.R.O.P. arrears, there are other arrears like Pre 2006 (Cir.547 arrears) is also to be paid. Also one more order on Delinking of 33 years service for full pension is also likely to come. All these arrears involves considerable amount. Therefore, it is informed that all the defence pensioners and their families are to be more vigilant to claim these arrears. Otherwise they will lose forever.
Source : Indian Ex servicemen blog