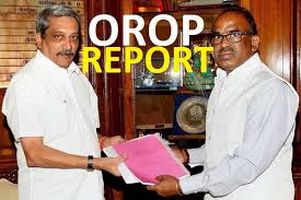 ONE RANK ONE PENSION

Will the Minister of DEFENCE

be pleased to state:

(a) whether the Ex-Servicemen are being paid enhanced pension after the implementation of One Rank One Pension (OROP) scheme, if so, the details thereof along with the total number of Ex-Servicemen benefited under the scheme;

(c) whether the Government has received requests / suggestions / objections / grievances from Ex-Servicemen associations on certain shortcomings in the said scheme,if so, the details thereof and the action taken by the Government thereon;

(d) whether it has come to the notice of the Government that an Ex-Servicemen committed suicide due to the denial of the benefit of the scheme, if so, the details of enquiry conducted and its outcome thereof; and

(e) the other steps taken / being taken for effective implementation of the scheme?

(b) Details of the allocation and utilization of funds under OROP are as under:

(c) Yes, Madam. Around 3200 representations for addressing the anomalies on OROP were received from individuals / Associations which were examined and issues referred to the Judicial Committee on OROP for its recommendations. The Committee has submitted its report on 26.10.2016.

(d) Ex-Subedar Ram Kishan Grewal had committed suicide at Delhi on 01.11.2016. On enquiry regarding payment of the benefits of OROP to him, the pension disbursing bank has informed that he was drawing pension @ Rs.22,608/- p.m. He was entitled for revised pension under OROP @ Rs.25,634/- p.m. The total amount of arrears of Rs.53,978/- on account of implementation of OROP has been credited to Bank Account of Late Ex Subedar Ram Kishan Grewal on 08.11.2016.