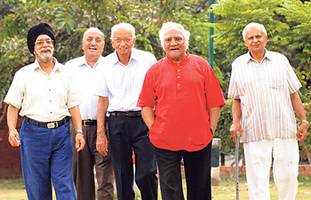 Sub: Implementation of Government‘s decisions on the recommendations of the Seventh Central Pay Commission – Revision of pension of pre-2016 pensioners/family pensioners etc.

The undersigned is directed to say that in pursuance of Government’s decision on the recommendations of Seventh Central Pay Commission, sanction of the President is hereby accorded to the regulation, with effect from 01.01.2016, of pension/ family pension of all the pre-2016 pensioners/ family pensioners in the manner indicated in the succeeding paragraphs. Separate orders are being issued in respect of employees who retired/died on or after 01.01.2016.

2.2 Separate orders will be issued by the Ministry of Defence in regard to Armed Forces pensioners/family pensioners.

2.3 These orders also do not apply to retired High Court and Supreme Court Judges and other Constitutional/ Statutory Authorities whose pension etc. is governed by separate rules/orders.

4.6 The revised pension/family pension arrived at as per paragraph 4.1 includes dearness relief sanctioned from 1.1.2016.

6. The existing instructions regarding regulation of dearness relief to employed/re-employed pensioners/family pensioners, as contained in Department of Pension & Pensioners Welfare O.M. No. 45/73/97-P&PW(G) dated 02.07.1999, as amended from time to time, shall continue to apply.

7. The cases of Central Government employees who have been permanently absorbed in public sector undertakings/autonomous bodies will be regulated as follows:-

Where the Government servants on permanent absorption in public sector undertakings/autonomous bodies continue to draw pension separately from the Government, the pension of such absorbees will be updated in terms of these orders. In cases where the Government servants have drawn one time lump sum terminal benefits equal to 100% of their pensions and have become entitled to the restoration of one-third commuted portion of pension as per the instructions issued by this Department from time to time, their cases will not be covered by these orders. Orders for regulating pension of such pensioners will be issued separately.

In cases where, on permanent absorption in public sector undertakings/autonomous bodies, the terms of absorption and/or the rules permit grant of family pension under the CCS (Pension) Rules, 1972 or the corresponding rules applicable to Railway employees/members of All India Services, the family pension being drawn by family pensioners will be updated in accordance with these orders.

8. The matter regarding Constant Attendant Allowance admissible to the existing pensioners shall be examined by a Committee comprising Finance Secretary and Secretary (Expenditure) as Chairman and Secretaries of Home Affairs, Defence, Posts, Health & Family Welfare, Personnel & Training and Chairman, Railway Board as Members. Till a final decision is taken based on the recommendations of the Committee, Constant Attendant Allowance shall be paid at existing rates.

9. All Pension Disbursing Authorities including Public Sector Banks handling disbursement of pension to the Central Government pensioners are hereby authorised to pay pension/family pension to existing pensioners/family pensioners at the revised rates in terms of para 4.1 and 5 above without any further authorisation from the concerned Accounts Officers/Head of Office etc. Wherever the age of pensioner/ family pensioner is available on the pension payment order, the additional pension/ family pension in terms of para 4.4. above may also be paid by the pension disbursing authorities immediately without any further authorisation from the concerned Account Officer/ Head of Office, etc. A suitable entry regarding the revised pension shall be recorded by the pension Disbursing Authorities in both halves of the Pension Payment Order.

11. Further orders in regard to revision of pension based on the recommendations of the Committee to be constituted in terms of the Government’s decision on Item No. 11 of this Department’s Resolution No. 38/37/2016-P&PW (A) dated 4th August, 2016, will be issued in due course.

12. After a decision as in para 11 above is taken by the Government and orders are issued in this regard, the Head of the Department of the Ministry, Department, Office, etc. from which the government servant had retired or where he was working prior to his demise will revise the pension/family pension of all pensioners/ family pensioners with effect from 1st January 2016 in accordance with those orders and issue revised Pension Payment Order (PPOs) accordingly.

13. It is considered desirable that the benefit of these orders should reach the pensioners as expeditiously as possible. To achieve this objective it is desired that all Pension Disbursing Authorities should ensure that the revised pension and the arrears due to the pensioners in terms of para 4.1. and para 5 above is paid to the pensioners or credited to their account by 3151 August, 2016 or before positively.

14. In their application to the persons belonging to Indian Audit and Accounts Department, these orders issue in consultation with the Comptroller and Auditor General of India.

15. Ministry of Agriculture etc. are requested to bring the contents of these Orders to the notice of Controller of Accounts/Pay and Accounts Officers and Attached and subordinate Offices under them on a top priority basis. All pension disbursing offices are also advised to prominently display these orders on their notice boards for the benefit of pensioners.

Joint Secretary to the Government of India