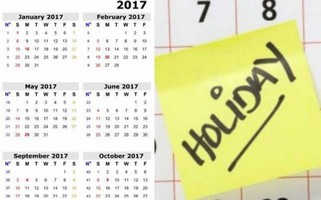 Odisha Govt has issued a Notification for Holiday List 2017

In   addition   to  the   holidays   as  listed   at  Annexure-I,    the   State  Government Employees  will be allowed to avail of one holiday at their option on any one of the festive occasion /  Commemorative   days  listed at  Annexure-II   irrespective   of  their  religious affiliation/ denomination  with  written  permission   of the authority,   competent  to  sanction casual leave.

Since the festive / Commemorative   days as listed at Annexure-III  fall on Sundays those days have not been specifically  declared as  holidays.

By Order of the Governor