Applicability of CCS (RP) Rules, 2016 to persons re-employed in Government Service & whose pay is debitable to civil estimates – Ministry of Defence

Subject: Applicability of CCS (RP) Rules, 2016 to persons re-employed in Government Service & whose pay is debitable to civil estimates.

2. The matter has been examined and this Department’s comments/observations are as follows:-

(ii) With regard to Para 7 of DOP&T’s Draft OM, it is pertinent to mention that the National Pension Scheme was made applicable only w.e.f. 01.01.2004. Hence, Orders may be issued in consultation with Pension Fund Regulatory and Development Authority (PFRDA)

(iii) With regard to Sub-Para 3.2(vi), it is suggested that the following wordings which appear in the 1986 OM may be considered to be included:

“Regard will also be given to the promotion which the officer would have received in his parent service or cadre as provided for in FR113, provided that he would have officiated for ten months or more.”

(v) With regard to illustration annexed to the draft OM, the same appears to be worked out based on the provisions of the draft OM. However, the same needs to be vetted by the appropriate authorities in Ministry of Finance to avoid any misinterpretation of the draft provisions.

(vi) With regard to. Order 7, it is mentioned that they way Military Service Pay (MSP) a was a part of the Pre-Retirement Pay, based on which Pension has been fixed and MSP is to be excluded from the pay so fixed on re-employment. Similarly, Good Conduct Badge Pay, Classification Pay etc, which are included in the pension needs to be excluded for deduction from the pay to be fixed in the re-employed post.

(vii) Para 3(2)(vii) of the Draft Orders defines Pre-Retirement Pay in the context of 5th, 6th and 7th Pay Commission. However, the present order in made applicable w.e.f. 04.01.2016. In that scenario, defining Pre-Retirement Pay for 5th and 6th CPC period needs to be made clear as at that time, rules of 1986 further amended vide OM dated 05.04.2010 were in force and those instructions cannot be withdrawn at this juncture for pay fixation upto 31.12.2015.

(ix) The word ‘Notional Basic’ in line 18 of Sub Para 4(III) of the Draft Orders should be corrected to ‘Notional Pay’.

(x) The word ‘Officers’ in line 2 of Sub Para 10(i) and lines 2 & 4 of Sub Para 15(I) of the Draft Orders should be corrected to ‘person’ as the Orders are applicable to both Officers and PBORs. 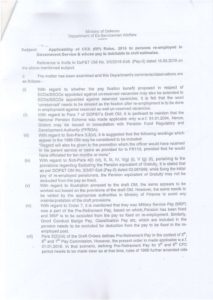 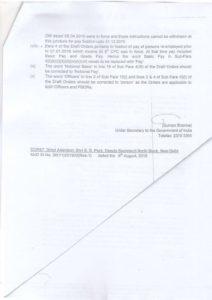 Check the following links related to this topic: