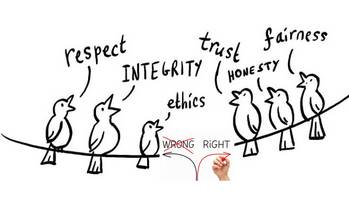 The undersigned is directed to refer the existing instructions/ guidelines of this Department on filling up the column relating to integrity in ACRs (now APARs). It has been brought to the notice that many a time Reporting Officers do not make clear and categorical mention about the integrity of the officer reported upon. Further, it has also been seen that in case of doubt of integrity of the officer reported upon, the procedures prescribed for filling up the integrity column in APARs are not being followed appropriately.

2. Now, it has been decided to reiterate the followings instructions/guidelines contained in para 5.2 of this Department OM No. 51/5/72-Ests. (A) dated 20 th May, 1972 on procedures prescribed for filling up the column relating to integrity in APARs:

(a) Supervisory officers should maintain a confidential diary in which instances which create suspicion about the integrity of a subordinate should be noted from time to time and action to verify the truth of such suspicions should be taken expeditiously by making confidential enquiries departmentally or by referring the matter to the Special Police Establishment. At the time of recording the annual confidential report, this diary should be consulted and the material in it utilised for filling the column about integrity. If the column is not filled on account of the unconfirmed nature of the suspicions, further action should be taken in accordance with the following subparagraphs.

(b) The column pertaining to integrity in the character roll should be left blank and a separate secret note about the doubts and suspicions regarding the officer’s integrity should be recorded simultaneously and followed up.

(c) A copy of the secret note should be sent together with the character roll to the next superior officers who should ensure that the follow-up action is taken with due expedition.

(d) If, as a result of the follow-up action, an officer is exonerated, his integrity should be certified and an entry made in the character roll. If suspicions regarding his integrity are confirmed, this fact can also be recorded and duly communicated to the officer concerned.

(e) There are occasions when a reporting officer cannot in fairness to himself and to the officer reported upon, either certify integrity or make an adverse entry, or even be in possession of any information which would enable him to make a secret report to the Head of the Deptt. Such instances can occur when an officer is serving in a remote station and the reporting officer has not had occasion to watch his work closely or when an officer has worked under the reporting officer only for a brief period or has been on long leave, etc. In all such cases, the reporting officer should make an entry in the integrity column to the effect that he has not watched the officer’s work for sufficient time to be able to make any definite remark or that he has heard nothing against the officer’s integrity as the case may be. This would be a factual statement to which there can be no objection. But it is necessary that a superior officer should make every effort to form a definite judgment about the integrity of those working under him, as early as possible, so that he may be able to make a positive statement.

(f) There may be cases in which after a secret report/note has been recorded expressing suspicion about an officer’s integrity, the inquiries that follow do not disclose sufficient material to remove the suspicion or to confirm it. In such a case the officer’s conduct should be watched for a further period, and, in the meantime, he should, as far as practicable, be kept away from positions in which there are opportunities for indulging in corrupt practices.

3. It is further conveyed that the remarks against the integrity column of APARs of the officer reported upon shall be made by the Reporting Officer in one of three options mentioned below:

(b) Since the integrity of the officer is doubtful, a secret note is attached.

(c) Not watched the officer’s work for sufficient time to form a definite judgement but nothing adverse has been reported to me about the officer.

4. All Ministries/Departments are requested to bring it to the notice of all concerned for strict compliance.