There is clear evidence that governments have progressively moved towards a liberalised  regime for past  pensioners.  The  VI CPC  has  further provided  for additional pension with advancing age.

What this has effectively translated into is testified by examples(Actual cases as obtained from Central Pension Accounting Office (CPAO) etc.) of pension fixation of personnel across groups who have retired in the past decades. For example a Secretary to the Government of India retiring on 31 August, 1992 was in receipt of a basic pension of ₹4,000 per month.

The basic pension after implementation of the V and VI CPC got revised to ₹13,000 and ₹40,000 respectively. With the benefit of dearness relief (Dearness Relief of 119 percent, as effective from 1 July, 2015.) this pensioner is on date entitled to a total payout in terms of pension and dearness relief of ₹87,600.

With the benefit of dearness relief(Dearness Relief of 119 percent, as effective from 1 July, 2015.) the pensioner is on date entitled to a total payout in terms of pension and dearness relief of ₹49,715 per month. The basic pension for a Group `C’ official retiring on 30 September, 1991 from the scale of ₹950- 1500 was fixed at ₹717 per month. His basic pension, after implementation of the V and VI CPC, got revised to ₹2,188 and ₹4,946 respectively. With dearness and pensionery increase due beyond 80 years the pensioner is in receipt of a total payout of ₹12,998 per month.

The three illustrations point to a substantial increases in pension, across groups, during a span of between 20 and 25 years.

Recommendations  of  the  Commission:

For  employees  joining  on  or  after 01.01.2004, the concept of pension, so far as Civilian employees including CAPFs are concerned, has undergone a complete change. After the enactment of the Pension Fund Regulatory and Development Act, 2013, it is not the exclusive liability of the government to pay the pension. As per the new dispensation the employee and the government are to make equal matching contribution towards their pension. This dispensation is not applicable to the defence forces personnel. They continue to get the defined benefit pension as before. In this section the Commission is dealing with Civilian pensioners under the old pension scheme, i,e, those who joined before 01.01.2004.

The Commission recommends the following pension formulation for civil employees including CAPF personnel, who have retired before 01.01.2016:

i)          All the civilian personnel including CAPF who retired prior to 01.01.2016 (expected date of implementation of the Seventh CPC recommendations) shall first be fixed in the Pay Matrix being recommended by this Commission, on the basis of the Pay Band and Grade Pay at which they retired, at the minimum of the corresponding level in the matrix. This amount shall be raised, to arrive at the notional pay of the retiree, by adding the number of increments he/she had earned in that level while in service, at the rate of three percent. Fifty
percent of the total amount so arrived at shall be the revised pension.

ii)         The second calculation to be carried out is as follows. The pension, as had been fixed at the time of implementation of the VI CPC recommendations, shall be multiplied by 2.57 to arrive at an alternate value for the revised pension.

iii)        Pensioners may be given the option of choosing whichever formulation is beneficial to them.

It is recognised that the fixation of pension as per formulation in (i) above may take a little time since the records of each pensioner will have to be checked to ascertain the number of increments earned in the retiring level. It is therefore recommended that in the first instance the revised pension may be calculated as at (ii) above and the same may be paid as an interim measure. In the event calculation as per (i) above yields a higher amount the difference may be paid subsequently. 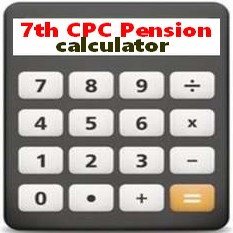 7th Pay Commission Pension Calculator as per the Recommendations of 7th CPC in its report date 19.11.2015 Central Government Pensioners including Railway Pensioners can calculate their pension based on Pension as on October 2015.

Illustration on fixation of pension based on recommendations of the Seventh CPC.