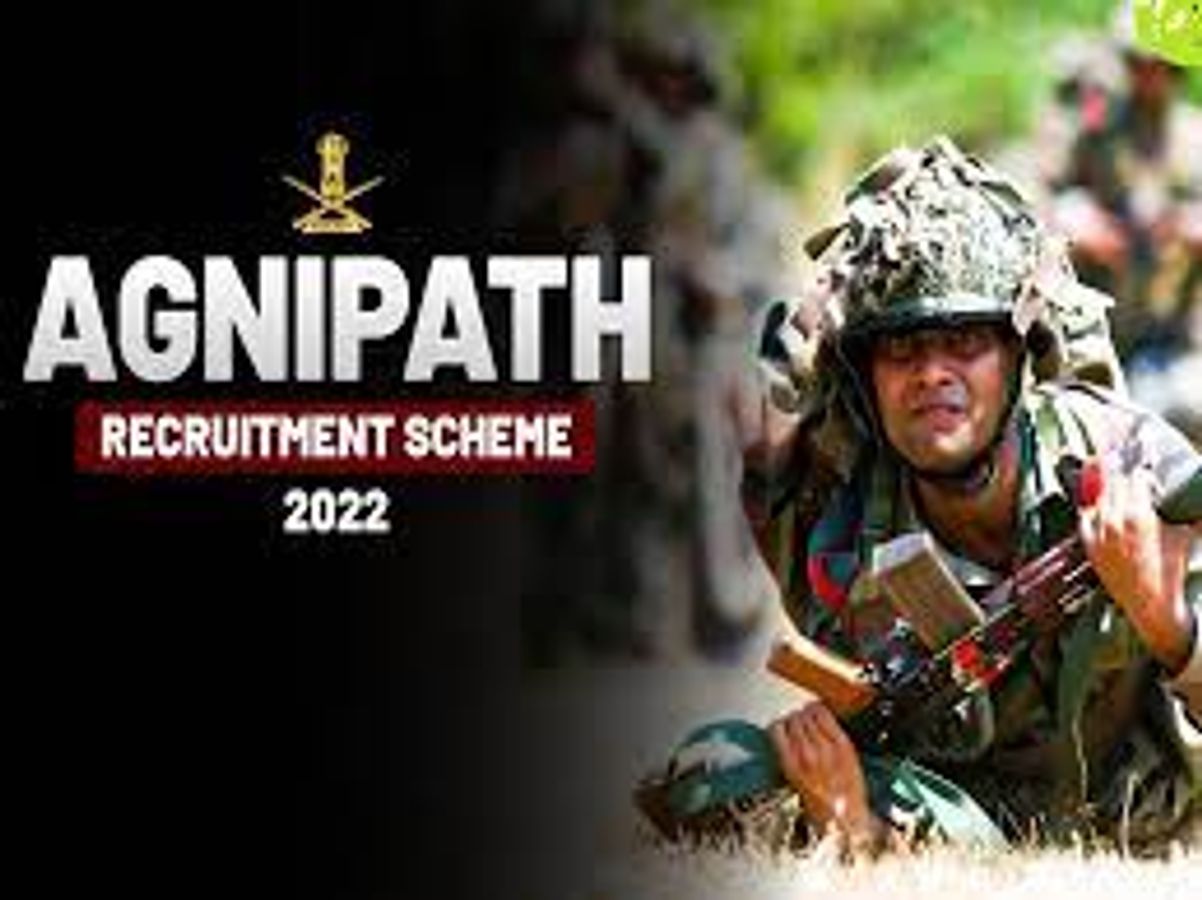 1. The salient aspects of terms and conditions of service for persons enrolled through the Agnipath Scheme for service in the IA are mentioned in the succeeding paragraphs.

(i) Candidates will be enrolled under Army Act, 1950 for a service duration of four (04) years including the training period.

(ii) Agniveers so enrolled will be subject to Army Act, 1950 and will be liable to go wherever ordered, by land, sea or air.

(iii) Agniveers so enrolled under the scheme, will not be eligible for any kind of Pension or Gratuity.

(i) Service of Agniveers will commence from the date of enrolment.

(ii) Agniveers would form a distinct rank in the IA, different from any other existing ranks.

(iii) Leave, Uniform, Pay & Allowances during the service period of four years will be governed by orders and instructions in respect of such individuals issued by the Government of India (GoI) from time to time.

(iv) Agniveers will be liable to be assigned any duty in organisational interest, as decided from time to time.

(v) Personnel enrolled through Agniveer Scheme, will be required to undergo periodical medical check-ups and physical/ written/ field tests as governed by orders issued. The performance so demonstrated would be considered for subsequent offer for enrolment in the Regular Cadre.

(vi) Agniveers can be posted to any regiment/unit and can be further transferred in organisational interest.

(i) All Agniveers will be discharged on completion of four years of service.

(ii) On discharge after completion of four years, Agniveers will be paid a ‘Seva Nidhi’ package to enable them to return to the society for pursuing employment in other sectors.

(iii) Agniveers will not be eligible for any kind of pension or gratuity, neither will they be eligible for Ex Servicemen Contributory Health Scheme (ECHS), Canteen Stores Department (CSD) facilities, Ex Serviceman status and other related benefits.

(iv) Agniveers will be barred from disclosing classified information gained during service to any unauthorised person or source under Official Secrets Act, 1923.

(i) Based on organisational requirements and policies promulgated, Agniveers who are completing their engagement period in each batch will be offered an opportunity to apply for enrolment in the regular cadre of IA. These applications will be considered in a centralised manner by the Army based on an objective criteria including performance during their engagement period and not more than 25% of each specific batch of Agniveers will be enrolled in regular cadre of the IA, post completion of their four year engagement period.

(ii) Agniveers so enrolled as regular cadre would be required to serve for a further engagement period of 15 years and will be governed by terms and conditions of service (of Junior Commissioned Officer/ Other Ranks in IA) currently in vogue (as amended from time to time). Agniveers will not have any right to be selected. Selection will be exclusive jurisdiction of the IA.

(iii) With introduction of this Scheme, the enrolment of soldiers in the regular cadre of IA, except technical cadres of Medical Branch, will be available only to those personnel who have completed their engagement period as Agniveer.

3. Eligibility. Following will be applicable:-

(a) Age Limit. The age limit for the applicants will be from 17 ½ years to 21 years. 1st day of the month of Oct of recruiting year (01 Apr – 31 Mar) will be taken as effective date for determining the age eligibility for the candidates. The recruitment will be on All India All Class basis.

(b) Gender & Marital Status. As applicable to respective categories/ trades being enrolled as on date for the IA.

(c) Medical Standards. A candidate must meet the medical eligibility conditions laid down for enrolment in the IA as applicable to respective categories/ trades.

4. Enrolment. As part of the enrolment process, each Agniveer will be required to formally accept all terms and conditions of the Agnipath Scheme. For personnel below the age of 18 years, the enrolment form will need to be signed by the parents/ guardians, in accordance with extant provisions.

5. Training. On being enrolled, candidates will be imparted suitable military training based on organisational requirements.

(a) Agniveers will be liable to be assigned any duty in organisational interest, as decided from time to time.

(b) Agniveers can be posted to any regiment/ unit and can be further transferred to other regiments/ units in organisational interest.

8. Leave. Grant of leave will be subject to exigencies of service. The following leave may be applicable for Agniveers during their engagement period:-

(b) Sick Leave. Based on medical advice.

9. Uniform. A distinctive insignia will be worn by the Agniveers on their uniform during their service period. Detailed instructions shall be issued separately.

10. Honours & Awards. Agniveers will be entitled to honours and awards, as per extant guidelines governing the subject for IA.

11. Medical & CSD Facilities. For the duration of their engagement period in the IA, Agniveers will be entitled for medical facility at military hospitals as well as CSD provisions.

(i) The pay & emoluments of Agniveers will be as given below :-

(ii) From the above package, 30% will be compulsorily deposited every month in a corpus which will be matched by the GoI. Balance amount less the corpus contribution will be the in-hand component.

(b) Seva Nidhi Package. On discharge at four years, the corpus of Rs. 5.02 lakhs will be matched by the GoI, an amount of ₹10.04 lakhs and accrued interest will be given to the Agniveers. In case of Agniveers who are subsequently selected for enrolment in the IA as regular cadre, the Seva Nidhi package to be paid to them will comprise only their contribution including accrued interest thereon. In the case of Agniveers exiting service before the end of their engagement period on their own request, the individual’s Seva Nidhi package, accumulated as on date, will be paid with the applicable rate of interest. In such cases, no Govt contribution to Seva Nidhi Package will be entitled. The Seva Nidhi will be exempt from Income Tax.

(c) Payment Modality – Seva Nidhi Package. Two options to receive Seva Nidhi package will be provided to each Agniveer, with an aim to provide financial loans for self-employment/ entrepreneurship through a bank guarantee as also to meet immediate/ incidental expenses, on exit. Firm details will be promulgated separately.

(d) Allowances. The Agniveer pay is a composite package and will not be eligible for any Dearness Allowance and Military Service Pay. He will get applicable Risk & Hardship, Ration, Dress and Travel allowances as decided by the GoI from time to time.

(e) Agniveers will be exempted from making any contribution in Armed Forces Personnel Provident Fund or any other Provident Fund.

(f) There shall be no entitlement towards gratuity or pensionary benefits for Agniveers enrolled through this Scheme.

13. Life Insurance Cover. Agniveers will be provided non-contributory life insurance cover of ₹48 lakhs for the duration of their engagement period and they will not be eligible for Army Group Insurance Fund (AGIF) schemes/ benefits.

(a) The maximum period of service for Agniveers will be as enumerated at Para 2 above. However, the services of Agniveers under this scheme may be terminated at any time in accordance with the Army Act 1950.

(b) Release at own request prior to completion of terms of engagement of Agniveers is not permitted. However, in most exceptional cases, personnel enrolled under this scheme may be released, if sanctioned by competent authority.

15. Compensation for Death. Agniveers will not be governed by provisions contained in the Pension Regulations for Army (as amended from time to time). They would be suitably compensated for death. The death for the purpose of provision of financial benefits to Agniveers will be categorised as follows :-

(a) Category X. Death due to natural causes neither attributable to nor aggravated by military service.

(b) Category Y. Death due to causes which are accepted as attributable to or aggravated by military service or due to accidents/ mishaps in the performance of duties including training.

16. Compensation for Disability. In case an individual is placed in a Permanent Low Medical Category (LMC), the authorities will assess the percentage of disability/ attributability. In case of disability (attributed/ aggravated due to service conditions), one time ex-gratia as mentioned below will be granted. Computation of extent of disability will be as under :- 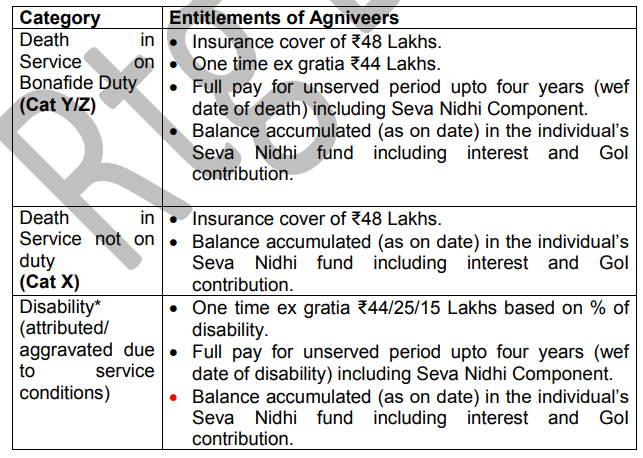 17. Benefits for Personnel Exiting at Four Years of Service. After completing four years of service (as applicable), the following benefits will be offered to the exiting individuals:-

(a) Seva Nidhi Package. Refer Para 12(b) above. The corpus generated after four years of contribution will be paid to the exiting Agniveers.

(b) ‘Agniveer’ Skill Certificate. At the end of engagement period, a detailed skill set certificate will be provided  to the Agniveers, highlighting the skills and level of competency acquired by the personnel during their engagement period.

(c) Class 12th Certificate. Agniveers who have been enrolled after qualifying Class 10th, a certificate for 12th(equivalent) will be given on completion of their four years engagement period, based on skills attained. Detailed instructions shall be issued separately.