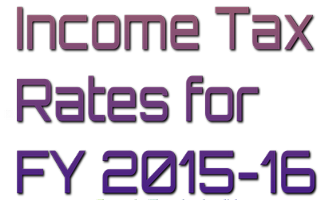 B. Rates of tax for every individual, resident in India, who is of the age of sixty years or more but less than eighty years at any time during the financial year:

C. In case of every individual being a resident in India, who is of the age of eighty years or more at any time during the financial year:

The amount of income-tax including the surcharge if any,  shall be increased by Education Cess on Income Tax at the rate of two percent of the income-tax.

An  additional  education  cess  is  chargeable  at  the  rate  of  one  percent  of  income-tax including the surcharge if any,  but not including the Education Cess on income tax.

Want to Calculate your Income Tax for the Year 2015-16? Use GConnect online income tax calculator