Central Pension Accounting Office has issued an OM to furnish the Aadhaar number and other particulars of the retiring Government Employee for seeding in their Pension account. 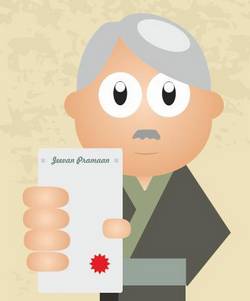 Subject: – Preparation of list of Government servants due to retire along with their Aadhaar numbers and incorporation of Aadhaar number in PPO Booklet.

A reference is invited to earlier OMs issued on the captioned subject as mentioned above. Through these OMs, all Heads of Offices were requested to ensure that wherever available Aadhaar No. is provided to their Pay & Accounts Offices alongwith pension papers of the retiring government servants. In this regard provisions have already been made in CAM-52 (PPO Booklet) by adding the following columns after existing column No.5.

2. It is reiterated that to avoid any delay in finalizing the pension cases, all the Head of Offices should have first-hand information of the Aadhaar number while preparing the list of retiring government officials as per the provision of Rule 56 of CCS (Pension) Rules and should provide the same to the Accounts Officer concerned not later than 31st January, 30th April, 31st July or 31st October of that year.

4. In order to achieve the objective of seeding of Aadhaar number with maximum number of fresh PPOs, all Pr. CCAs/CCAs/CAs/AGs/Administrators of UTs are once again requested to ensure that all fresh PPOs are sent to CPAO with Aadhaar numbers wherever available and quarterly list of would be retirees as mentioned in para 2 above also mention Aadhaar numbers.

Suspension of Group ‘A’ Officers of CSS / CSSS

Government employees retiring during COVID pandemic will get “provisional” pension

Regulation of pension and other retirement benefits of Railway servants