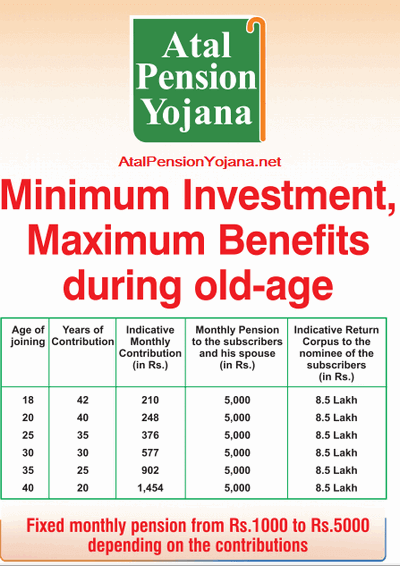 The Pension Fund Regulatory and Development Authority (PFRDA) through its ‘One Nation One Pension’ Mobilization Campaign has sourced approximately 3.07 lakh APY accounts which led to a total of 62 lakh enrolments under the Atal Pension Yojana (APY) as on date. This campaign was organized all over the country by PFRDA from 2nd August to 19th August 2017 in association with the APY Service Provider Banks. Increasing enrolment is attributed to financialization of assets and driving the people to pension products which has Govt of India implicit guarantee to give an assured pension to the subscriber, spouse and return of corpus to the nominee.

At a time when the interest rate on various financial instruments including Savings Bank is declining, Atal Pension Yojana as a pension scheme offers a guaranteed rate of 8% assured return for the subscribers and also the opportunity of higher earnings in case the rate of return is higher than 8% at the time of maturity, after staying invested in the scheme for 20-42 years. Department of Financial Services in association with Pension Fund Regulatory and Development Authority (PFRDA) has been organizing various APY campaigns to give thrust through which the population not covered by any pension scheme is approached by APY Service Provider banks and Department of Posts to inform about the salient features and benefits of the APY scheme and are encouraged to get enrolled in the scheme.

The objective of PFRDA is to cover the maximum possible population uncovered by any pension scheme under the APY scheme so that India as a nation can move from a pension less to a pensioned society and the citizens can live a life of dignity in their vulnerable years.
Source : PIB