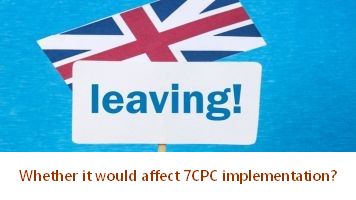 What is connection between Brexit and 7th Pay Commission ? – There were many flash news in the media on Friday like “Brexit may delay the decision of govt on 7th Pay Commission”. This is mainly after a jittery feeling settled in the Indian Stock Market as a result of Britain’s referendum (to decide whether the it will have to continue to remain with European Union), was voted in favour of exiting EU.

Why media connected this with 7th Pay Commission?

It is still unclear whether “Brexit” will actually happen, but the more votes in favour of “Brexit” has some short term impact on Indian Stock Market and in the Value of Indian Rupee. The stock market reacted sharply on 25th June 2016, in the fear of weakening of Indian Rupee, Inflation and negative impact on Indian Companies having international business in EU countries through Britain. But market recovered to some extent at closing.

Now we have to see whether this the short term uncertainty in Indian Economy due to Brexit will tell upon the Govt’s decision to implement 7th Pay Commission recommendations ?

Many Economists and financial analysts say now, Brexit is in fact a blessing in disguise for India as it may boost Indian Economy in the medium and longer run due to likely sluggishness in the price of commodities like Crude Oil, the import of which costs much now for India.

Experts point out certain other economic factors also, because of which India is not to be affected by “Brexit”

Checkout this Economic Times Article: When the world is jittery over Brexit, India has reasons to smile; here’s why

Brexit: Bad For Britain, But Potentially Good For India

Brexit a sad development, but not to affect India: CEA

Hence, we may safely conclude “Brexit” is a non-issue as far as implementation of 7th Pay Commission is concerned. Indian Stock Market may be volatile in the shorter run. But it is widely believed that Govt and RBI would take appropriate action to control all these knee jerk reactions.