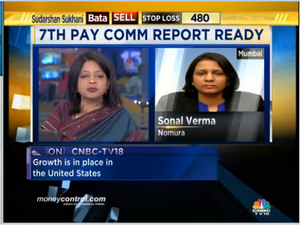 The Seventh Pay Commission report is likely to submitted to the Finance Ministry on Thursday, says the sources. However, the government employees and pensioners are in for disappointment as the report is expected to propose a 15 percent hike in salaries starting January 1, 2016.

Sonal Verma of Nomura says the indicated 15 percent hike would be much lower than the expected 35 percent that was given in 2008. She adds that the government, on its part, would try to balance the expenses with it trying to retain its fiscal deficit target of 3.5 percent of GDP for this year.

Verma believes the seventh pay commission will boost demand and sale in consumer durables such as cars, two-wheelers and electronics.

Pay commissions review the salary structure of central government employees every ten years. Below is the verbatim transcript of Sonal Verma’s interview with Latha Venkatesh on CNBC-TV18.

Q: From what you have picked up, what are you expecting that the recommendations will do to the economy?

A: I think the news reports are talking about a 15 percent increase which is significantly lower than what the 6th pay commission had recommended which was close to a 40 percent increase in salaries. The extent of increase is actually on the lower side of expectations. Nevertheless in terms of the economic impact, there are two-three things to keep in mind.

Also, I think this is clearly consumption bonus therefore typically demand for discretionary items like cars and other white goods tends to pick up which is something we should expect as well. Obviously the key challenge for the government is how do you balance the fiscal because you do know that in FY17 the fiscal deficit target is 3.5 percent of gross domestic product (GDP). So, we have one rank one pay (OROP), we have the 7th pay commission on the lower side but nevertheless it is an additional expenditure. So, there has to be some strategy to balance some of the expense items that they now have to pay for.

Q: The long in the short of what you are saying is that the consumption boost is not going to be as much as the markets and the economists were preparing?

A: I would think so. I think the inflation linked, the earners’ allowance increase has been going on every year. So, this is basically the real increases in salaries which over the 10-year period is a 15 percent increase. So, it is like 1.5 percent real rate increase. So, typically like I said, most of our recent memories for the 6th pay commission where the hike was close to 40 percent so I would say the extent of increase is on the lower side of expectations. Nevertheless it is an increase and therefore it will lead to some increase in consumption no doubt.

Another coverage of CNBC TV18 on 7th Pay Commission Report