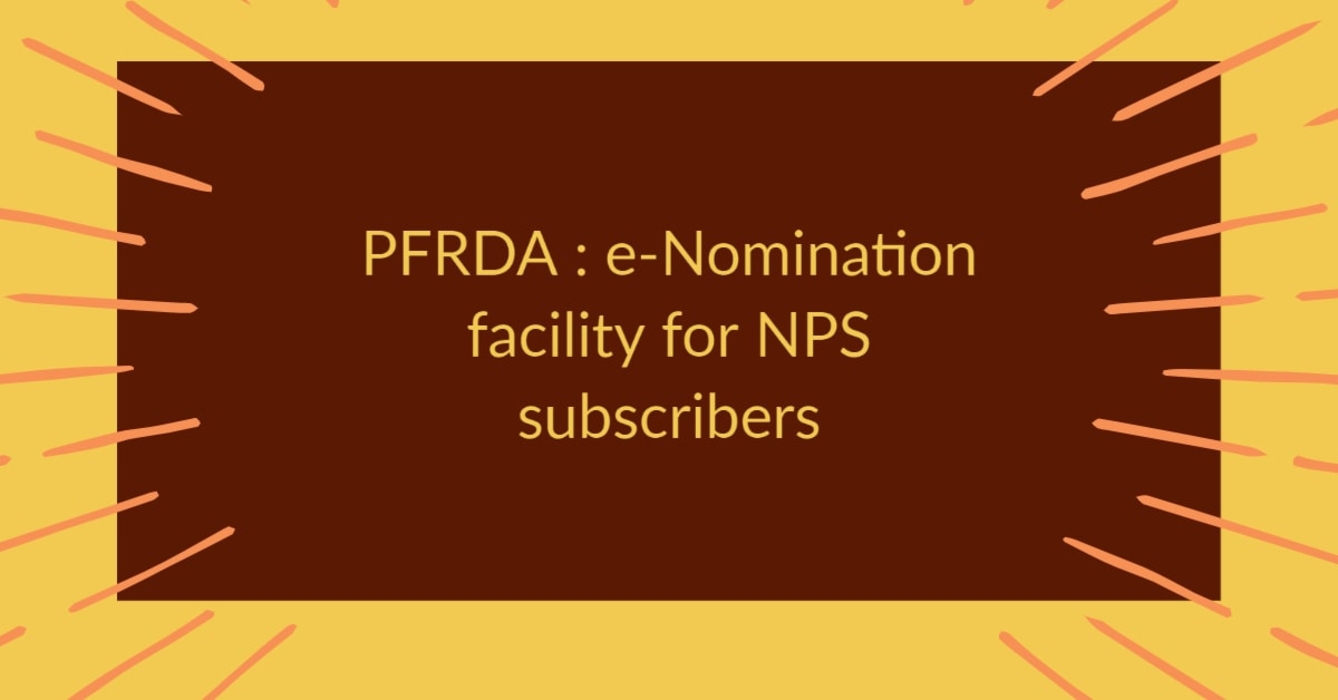 To,
All the NPS stakeholders

PFRDA had introduced e-Nomination facility for the benefit of NPS Subscribers vide its communication dt. 03.09.2020.

2. The existing Subscribers of NPS who wish to change their nomination in their PRAN can use ‘e- Nomination’ through their login credentials. The Subscribers can also opt to submit the application for changes in the Nomination, physically to the associated Nodal Officers, Corporate or Points of Presence (POPs) as the case may be.

4. In the interest of Subscribers, it has been decided that once the subscriber initiates the nomination request, the Nodal Office would be given an option of either Accept or Reject the nomination request. In case, the Nodal Office has not initiated any action against the request within the 30 days period, the request would get accepted in CRA system. The revised process flow shall also be applicable to the existing e-Nomination, which are still unauthorized.

6. In the e-Nomination, the Subscribers will also need to submit an online declaration stating that “I understand and consent to that nomination being made by me now shall be invalid ab initio if it is not consistent with Regulation 32 of the PFRDA (Exits and Withdrawals) Regulations, 2015 and amendments”.

7. The NPST/Nodal Officers/POPs/CRA/Corporate can educate their Subscribers about the rules of Nomination and suitably advise them for making the changes in the Nomination if those nominations are not as per PFRDA Guidelines. The roles (indicative but not exhaustive) of each Intermediary/ Employer enclosed at the Annexure II for ready reference.

The revision in the e-Nomination process flow shall be effective from 1st Oct 2022.

CHAPTER VII of PFRDA (Exits and Withdrawals under the NPS) Regulations, 2015:

Regulation 32. Nomination. – Notwithstanding anything contained in these regulations or in any other law for the time being in force, a subscriber, at the time of joining the National Pension System is required to make a nomination, in the specified form, conferring on one or more persons the right to receive the amount that may stand to his or her credit in the accumulated wealth or fund in the event of his or her death, before that amount becomes payable or having become payable has not been paid. The nominee or nominees, as the case may be, shall be entitled, on the death of the subscriber, to receive, to the exclusion of all other persons, all such moneys which have so remained unpaid:

Explanation I – For the purposes of this chapter, – (a) the expression “family”,