India is set to witness a sharp slowdown in population growth in the next two decades, the Economic Survey report has flagged. It says that although the country as a whole will enjoy the “demographic dividend” phase, some states will start transitioning to an ageing society by 2030s.

With life expectancy for both males and females is likely to continue rising, increasing the retirement age for both men and women going forward could be considered in line with the experience of other countries.

Population growth in India has been slowing in recent decades from an annual growth rate of 2.5 per cent during 1971-81 to an estimated 1.3 per cent as of 2011-16. Going with the trend, the Survey suggests that policy makers need to prepare for ageing, which will need investments in health care as well as a plan for increasing the retirement age in a phased manner. 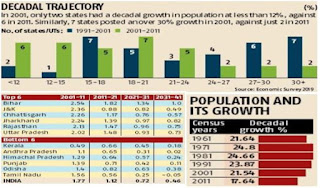