Government of India, vide Ministry of Defence letter no. DMA/JS (N&DS)/2021/Agnipath-01 dated 15.06.2022 introduced AGNIPATH Scheme for enrolment in Indian Armed Forces. In pursuance of the Government’s decision to implement the Agnipath Scheme, 2022, the Competent Authority has decided to create a non-lapsable dedicated ‘Agniveer Corpus Fund’ in the interest bearing section of the Public Account head.

2. The modalities of the Agniveer Corpus Fund are indicated in the Annexure-1.

3. The nomination form is annexed at Annexure-2.

The package given to an Agniveer from Agniveer Corpus Fund will be called as Seva Nidhi. The Same will be deemed to have come into force on 1st November, 2022.

(a) “Accounts Officer” means the officer to whom the duty to maintain the Agniveer Corpus Fund of the subscriber has been assigned by Government or Controller General of Defence Accounts of India, as the case may be OR any Officer nominated by the Government in this regard.

(i) in the case of a male subscriber, the wife or wives, parents, children, minor brothers, unmarried sisters, deceased son’s widow and children and where no parents of the subscriber is alive, a paternal grandparent:

Provided that if a subscriber proves that his wife has been judicially separated from him or has ceased under the customary law of the community, to which she belongs to be entitled to maintenance she shall henceforth be deemed to be no longer a member of the subscriber’s family in matters to which these orders relate unless the subscriber subsequently intimates, in writing to the Accounts Officer that he shall continue to be so regarded.

(ii) in the case of a female subscriber, the husband, parents, children. minor brothers, unmarried sisters, deceased son’s widow and children and where no parents of the subscriber is alive, a paternal grandparent:

NOTE: “Child” means a legitimate child and includes an adopted child, where adoption is recognized by the personal law governing the subscriber [or a ward under the Guardians and Wards Act, 1890 ( 8 of 1890), who lives with the Agniveer and is treated as a member of the family and to whom the Agniveer has, through a special will, given the same status as that of a natural born child]

(d) “Seva Nidhi’ means an individual package wherein contributions by the Agniveer and matching contribution by the Government alongwith interest thereon is accounted.

3. CONSTITUTION OF THE FUND

(a) The Fund shall be maintained in rupees.

All Agniveer’s under AGNIPATH Scheme 2022 has to mandatorily subscribe to the Fund.

(a) A subscriber shall, at the time of joining the Fund, send to the Accounts Officer through the Commanding Officer of the Unit a nomination conferring on one or more persons the right to receive the amount that may stand to his credit in the Fund in the event of his death, before that amount becomes payable or having become payable has not been paid:

Provided that a subscriber who has a family at the time of making the nominations shall make such nomination only in favour of a member or members of this family:

(b) If a subscriber nominates more than one person, he shall specify in the nomination the amount or share payable to each of the nominees in such manner as to cover the whole of the amount that may stand to his credit in the Fund at any time.

(c) Every nomination shall be made in the Form set forth in the Annexure-2.

(d) A subscriber may provide in a nomination-

(ii) that the nomination shall become invalid in the event of the happening of a contingency specified therein:

Provided that if at the time of making the nomination. the subscriber has only one member of the family. he/she shall provide in the nomination that the right conferred upon the alternate nominee under Clause (a) shall become invalid in the event of his subsequently acquiring other member or members in his family.

(e) Immediately on the death of a nominee in respect of whom no special provision has been made in the nomination or on the occurrence of any event by reason of which the nomination becomes invalid, the subscriber shall send to the Accounts Officer a notice in writing cancelling the nomination, together with a fresh nomination made in accordance with the provisions of this order.

(f) Every nomination made, and every notice of cancellation given by a subscriber shall, to the extent that it is valid, take effect on the date on which it is received by the Accounts Officer.

(b) Matching contribution of subscriptions by Government:

(c) Interest, as provided by Para 11, on above mentioned subscriptions.

(a) A subscriber shall subscribe monthly to the Fund.

(b) At present the individual contribution and the government contribution on monthly basis are as follows: –

9. TRANSFER TO FOREIGN SERVICE OR DEPUTATION OUT OF INDIA

(a) When emoluments are drawn from a Government treasury in India or from an authorized Office of disbursement outside India, recovery of Subscriptions shall be made from the emoluments themselves and transfer to concern account officer through banking channels on monthly basis.

(a) Government shall pay to the credit of the account of a Subscriber interest as applicable to PPF amended from time to time:

(b) Interest shall be credited with effect on last day in each year in the following manner: –

(i) On the amount to the credit of a subscriber on the last day of the preceding year-interest for twelve months:

(ii) On all the sums credited to the Subscriber’s account after the last day of the preceding year – interest from the date of deposit up to the end of the Current year:

(iii) The total amount of interest shall be rounded to the nearest ten rupees.

Provided that when the amount standing to the credit of a Subscriber has become payable, interest shall thereupon be credited under this order in respect only of the period from the beginning of the current year or from the date of deposit, as the Case may be, up to the date on which the amount Standing to the credit of the subscriber became payable.

(c) In addition to any amount to be paid, interest thereon up to the end of the month preceding that in which the payment is made, shall be payable to the person to whom such amount is to be paid.

12. WITHDRAWAL FROM THE FUND

An Agniveer cannot avail any advance/ withdrawal from the Fund during the four-year engagement period.

13. EXIT OF A SUBSCRIBER

The payment of Seva Nidhi at the time of Exit after four year / Death / Disability are as follows: –

(a) Exit on Successful Completion of Four years.

(b) On Successful Enrolment in the Armed Forces as regular soldier. In case of individuals who are subsequently selected for enrolment in the Armed Forces as regular cadre, the Seva Nidhi package to be paid to them will comprise only their contribution including accrued interest thereon. The matching contribution and the Accrued Interest thereon by the government will be transferred as receipts in the Consolidated Fund of India.

(c) On Death. The balance available in Seva Nidhi package which includes individual contribution, matching Government contribution and interest thereon, on date of death will be paid in one lump sum to the Nominee.

(d) Exit on Disability / Medically Boarded Out. The balance available in Seva Nidhi

package which includes individual contribution, matching Government contribution and interest thereon, on date of disability / medically boarded out will be paid in one lump sum to the individual.

14. RELAXATION OF ANY CLAUSE UNDER THIS ORDER

When the Competent Authority is satisfied that the operation of any of these rules causes or is likely to Cause undue hardship to a subscriber, he may, notwithstanding anything contained in these rules, deal with the case of such subscriber in such manner as may appear to him to be just and equitable. 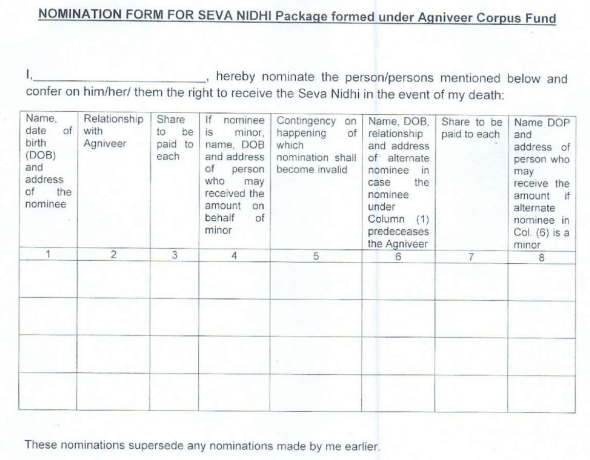