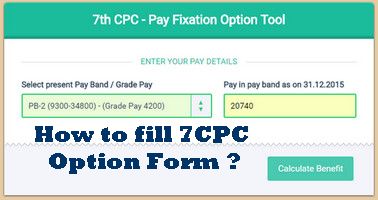 It is also provided in the said Rule that option has to be exercised within 3 months from the date of notification and that option provided once is final.

Obviously, many of the employees are hesitant whether to opt for fixation of pay as on 1st January 2016 or to opt for moving the same to next increment date.

7th Pay Commission Option form – How to fill the same to get maximum financial benefit ?

Are you still unsure on exercising this Option ? No worries. We have come up with an online tool to find if there is any benefit out of exercise of option under Rule 6 to remain in the pre-revised pay structure until next increment.

What is Exercise of Option under Rule 6 of 7th CPC Revised Pay Rules 2016 ?

Rule 5 of 7th Pay Commission Revised Pay Rules 2016, provides that a Central Government Employee can opt for getting existing pre-revised pay even after 1st January 2016 until he / she gets next or subsequent increment in the existing (6th CPC) pay structure if fixation of 7th Pay Commission Pay after getting such increment in the pre-revised pay is beneficial.

As per Rule 6, option under Rule 5, has to be given in writing to head of office in the Form appended in Annexure to Revised Pay Rules 2016.

Obviously, option of moving the 7th CPC pay fixation to next or subsequent increment date would involve immediate financial loss in the form of not getting Arrears of pay from January 2016.

However, if exercise of option under Rule 6 of 7th Pay Commission Revised Pay Rules 2016, provides enhanced 7th CPC pay in the form of fixation of pay in the next index in a Pay Level of Pay Matrix corresponding to pre-revised incremented pay as on July 2016 (or during subsequent increment) compared to fixation of 7CPC pay as on 1st January 2016 without getting additional increment in the pre-revised pay, then one can choose to opt for fixing the 7CPC Pay during the said increment date.

Click here to calculate the quantum of Pay Arrears if opting for 7th CPC pay fixation as on 1st January 2016
Disclaimer: GConnect team has taken all the efforts to ensure that this online tool provides correct result for all. However, we advice for verifying the correctness of result through other means also. GConnect.in is not responsible for any financial loss on account of choosing wrong option by a user of this tool
It could be seen that Employees drawing following Pay in Pay Band as on 31.12.2015 will be benefited out of excercising option under Rule 6 for remaining in pre-revised Pay structure until next increment as on 1st July 2016. So, they can choose to opt for fixing the revised pay as on 1st July 2016. Of Course, they have to incur the immediate financial loss as they will not be entitled to Pay arrears with effect from 1st January 2016.