Department of Expenditure, Ministry of Finance has clarified that House Rent Allowance applicable to Greater Noida is only at ‘Z’ class rates (i.e at the rate of 10%) as it was unclassified city prior to implementation of 6CPC. 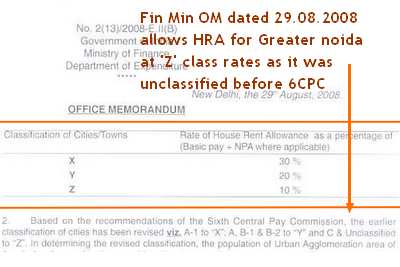 The full text of this Office Memorandum dated 06.08.2012 is as follows

Subject:- Clarification on the admissibility of House Rent Allowance to the Central Government Employees posted at Greater Noida — regarding.

It has been observed that payment of HRA @ 30% of Basic Pay is being made by certain Ministries/ Departments to the Central Government employees posted at Greater Noida, in violation of the instructions issued by this Ministry in this regard, from time to time.

2. It is, therefore, clarified that Greater Noida was an ‘Unclassified town/place for the purpose of grant of HRA prior to 01.09.2008 and consequent upon the implementation of the recommendations of the 6th Central Pay Commission, it has been classified as “Z” class town/place w.e.f. 01.09.2008 vide this Ministry’s O.M. No.2(13)/2008-Ell(B) dated 29 08.2008 on grant of House Rent Allowance to the Central Government employees and classification of cities/towns for this purpose.

3. Financial Advisers of All Ministries/Departments are, therefore, requested to ensure the implementation of the aforesaid O.M. in letter & spirit.

Honorarium to Inquiry and Presenting Officers

Night Duty allowance to the Central Government staff whose basic pay is Rs.43,600 or…

Dearness Allowance for Workmen and Officer Employees in banks – IBA