NO SETTLEMENT IN THE DISCUSSION WITH SECRETARY, DEPARTMENT OF POSTS

Today (04-06-2018) Secretary, Department of Posts called the three striking Unions (AIPEU-GDS, AIGDSU & NUGDS) for discussion at 04.00 pm. Three GDS General Secretaries and some office bearers went for discussion. Secretary, Posts told that if the striking unions give a letter withdrawing the indefinite strike, he is ready to take them to the Minister, Communications for discussion.

Unions clearly told that the condition that first withdrawing the strike and then discussion with Minister is not acceptable to them.

To
The Secretary,
Department of Posts

To facilitate end to the strike a definite assurance will serve good purpose to satisfy the members”.

It can be seen from the above that all three GDS unions have taken a reasonable and positive stand. Nobody can blame that the Unions are unreasonable.

All are requested to make maximum efforts to ensure 100% strike in all Circles / Divisions.

COPY OF THE LETTER 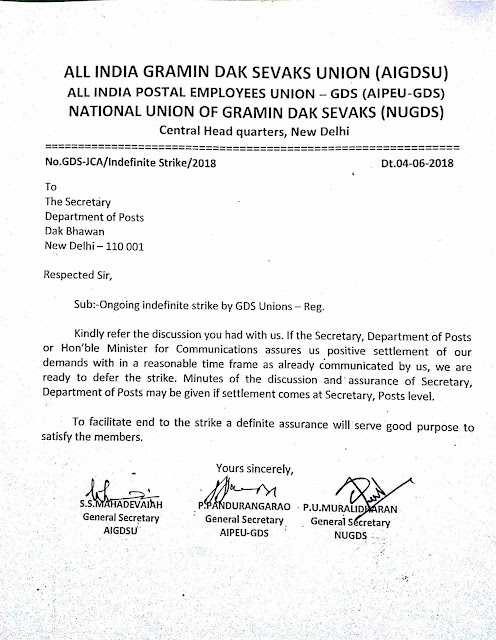 A Day After Sunil Chhetri’s Humble Appeal to Football Fans, All Tickets at Mumbai Stadium Sold Out

Cabinet approves release of an additional instalment of Dearness Allowance and…