Big news for these central government employees has been announced! They will get a big pay hike as well as promotions. The monthly increment is Rs 5,000! Employees house rent allowance as well as dearness allowance too have been hiked. Yes you read it that right! The central government has decided to increase the salary of the employees working in the Kendriya Vidyalaya Sangathan (KVS). KVS Personnel Department has also issued the order to increase the grade pay scale of these employees. According to the order, the grade pay of these employees has been increased from Rs 4,200 to Rs 4,600 and they have been promoted from level 6 to level 7. Due to this, their salary has increased by about Rs 5,000 monthly.

Assistant Secretary General, All India Audit and Accounts Association, Harishankar Tiwari has welcomed the decision. He said that the salary of the Assistant Editor working in KVS has been increased by the govt. The grade pay of such employees has been increased from Rs 4,200 to Rs 4,600. This will not only increase the basic salaries of these employees but will also affect their HRA and DA. 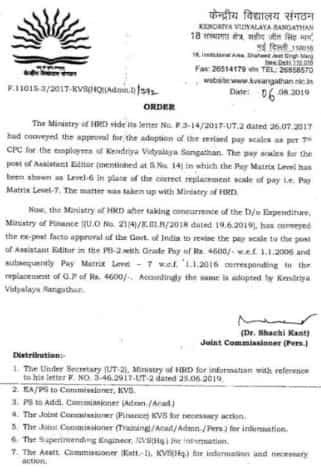 Harishankar Tiwari said that the copy of the order was issued on August 6. According to the order of Dr. Shachi Kant, Joint Commissioner in the Personal Department, this increment will be started from January 1, 2016 onward. These employees will also get arrears of about 3 and a half years. A copy of the order has already been issued to HRD ministries and KVS authorities.

Throttling the democratic functioning of Service Associations – NFPE writes to…